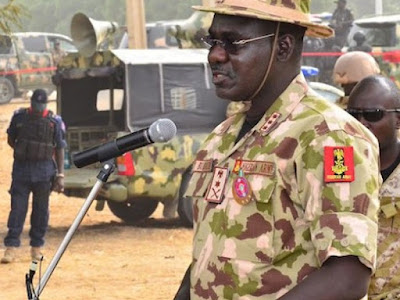 The Chief of Army Staff, Lt. Gen. Tukur Buratai, has lamented that some officers and men’s insufficient commitment is affecting the success of the counter-insurgency operations in the country.

Buratai who spoke on Tuesday at the opening of a five-day leadership workshop for mid-level officers and soldiers in Abuja, said the rising terrorist attacks were due to “insufficient commitment to a common national and military cause by those at the frontlines.”

The army chief noted that there were proven cases of soldiers unwilling to carry out assignments given to them, adding that reluctant troops should leave the service as the army would no longer tolerate them.

Buratai said, “It is unfortunate, but the truth is that almost every setback the Nigerian Army has had in our operations in recent times can be traced to insufficient willingness to perform assigned tasks or simply insufficient commitment to a common national and military course by those at the frontlines.

“Many of those on whom the responsibility for physical actions against the adversary squarely falls are yet to fully take ownership of our common national or service cause. And this is the reason why I have always ensured that the promotion of army personnel is essentially based on professional considerations only.

Buratai added that an effect of modernisation, globalisation and Information and Communications Technology in the last decades had been the “decline in nationalistic enthusiasm.”

“Hence the theme of the workshop has been aptly chosen as ‘Lead, follow or get out of the way,’” he said.

Buratai’s allegations might not be far from the truth as Boko Haram fighters backed by the Islamic State West African Province have attacked at least four Nigerian Army bases between last Wednesday and Tuesday.

This has already been raising concerns among the troops of the Operation Lafiya Dole in the North-East.

The army has lost a yet-to-be-ascertained number of soldiers when Boko Haram fighters attacked its bases in the Mobbar, Damasak, Monguno and Gajiram areas of Borno State.

Also, the acting Director of Army Public Relations, Col. Sagir Musa, has yet to confirm the number of casualties in any of the attacks.

In the attacks on army bases by the insurgents within the last one week, ammunition worth at least N20m was carted away by the fighters.

On June 12, while the Democracy Day celebration was ongoing nationwide, Boko Haram insurgents attacked a military location at Kareto village in the Mobbar Local Government Area of Borno State.

The terrorists reportedly killed the Commanding Officer of 158 Battalion and an undisclosed number of soldiers.

On Saturday, June 15, Boko Haram terrorists attacked another troops’ location in Damasak, Borno State, during which an unconfirmed number of soldiers were injured.

On Monday, the Boko Haram fighters attacked another military base in Monguno, Borno State, killing at least five soldiers.

The terrorists reportedly invaded the location in many utility vehicles in an attack, which occurred on Monday around 6pm.

Sources said before reinforcements came to Monguno, the terrorists had made away with the military’s ammunition and set a section of the base on fire.

On the same Monday, the terrorists in armoured trucks attacked another army base in Gajiram in the Nganzai LGA of the state.

A source said the terrorists were in the area for almost five hours and did not attack people who fled into the bushes or hid indoors.