Nations League: Portugal rely on Ronaldo to get better of Van Dijk 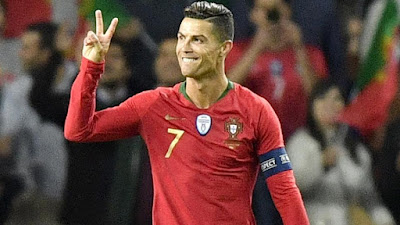 Portugal’s meeting with the Netherlands to decide the first ever winners of the Nations League on Sunday sees the unstoppable force of Cristiano Ronaldo face the immovable object in Virgil van Dijk.

Ronaldo sat out the early stages of UEFA’s new competition to save his 34-year-old legs for his first season at Juventus, but returned in time to ride to the host nation’s rescue once more in Wednesday’s semi-final against Switzerland.

The Swiss enjoyed the better of the game in Porto, but the five-time world player of the year was lethal in scoring his 53rd career hat-trick with three exquisite finishes.

“It’s the preparation – my work ethic. I still feel good despite being 34 years of age,” Ronaldo said.


“The most important thing is your head, to feel motivated and happy, and to follow my path as a player, because I think I still have a lot to give.”

Portugal’s run to the last four without their all-time record top goalscorer showed why hopes are high the European champions will remain a force even when Ronaldo does eventually depart the international scene.

The talent of Bernardo Silva, Joao Felix, Ruben Neven and Bruno Fernandes among others promises much, but Ronaldo remains Portugal’s X-factor.

“We know sometimes it is impossible to have good defending against Cristiano Ronaldo,” said the Netherlands coach Ronald Koeman.

“I think the best that we can do is keeping the ball, to have good ball possession because when we have the ball he can do nothing in attack.”