Moghalu reveals why he didn’t drag Buhari to court, speaks on Atiku’s case 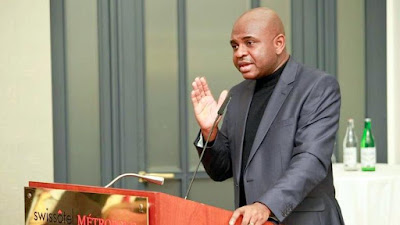 The presidential candidate of the Young Progressive Party, YPP, Prof. Kingsley Moghalu, has revealed why he did not challenge President Muhammadu Buhari’s victory at Presidential Election Tribunal.

Moghalu, who alleged that his votes were stolen, noted that his reason was personal and not because the people’s votes counted.

He said that he refused to go to court  because he did not think it was the wisest action.

Moghalu stated this at the weekend during the launch of a book written by the Bishop of the Niger Diocese, Anambra state, Rev. Dr. Owen Nwokolo at Ascension Church, Isiafor, Obosi.

In the case between Buhari and Peoples Democratic Party, PDP, at the Tribunal, Prof. Moghalu urged the judiciary to stand firm to save democracy.

“I did not think it was the best thing to do at that time. The PDP came second at the election, they went to court! I felt that’s okay, also by the time you are not APC, you are not PDP and a small party such as we are, I said our votes were stolen and I stand by it and also said that even if all our votes properly counted, we would not have won the election.

“Nevertheless, the votes were not properly counted but I chose not go to court. It was a simple, practical decision that I made; I didn’t think it was the wisest cause of action at that time.” He said.

On whether he has confidence on the tribunal, he said: “We can only hope that our judicial system will stand this test they are going through and I think we can only make that judgement at the end of the day.

“The areas President Buhari should focus on are security and economy. This country is moving, drifting into a failed state. With the security situation we have in Nigeria today, if it is not corrected the fact that the state is failing us is staring us in the face.

“So, it is imperative on the government to perform its number one duty to secure the lives of the citizen of Nigeria and then, the economy. Poverty is obvious in this country and it is a shame that Nigeria with all our human resources is judged the poverty capital of the world.

“We have the highest numbers of absolutely poor people; it’s a reflection of the failure of our leadership to focus on economic transformation, economic development and structurally lifting millions of people out of poverty. It takes knowledge and skill, politics won’t do it. That is technical knowhow, backed up by political will to manage the economy.”

“I have been offering my advice which has been in public domain with my economic thinking; it is available to government and to anybody who wants it. I have seen certain policy moves which I know it is a reflection of things I used to say during my campaign. I saw the government moving to create some sort of fund for innovation; these were my ideas and if they want to make use of them, good.

“My advice to the president is that he should pick his cabinet very carefully and competence should be his number one criteria,” Moghalu stated.