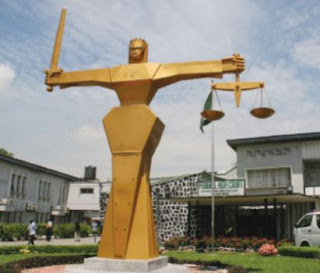 An FCT High Court Maitama on Monday admitted Philomins Chieshe, charged with alleged “missing”  N35 million belonging to the Joint Admission and Matriculation Board (JAMB) to bail in the sum of N20 million.

Chieshe, a clerical officer with JAMB, was arraigned last Friday by the Economic and Financial Crimes Commission (EFCC) alongside Samuel Sale Umoru, a state coordinator with JAMB.

Ruling in the bail application,  Justice Peter Affen declared that bail was not about setting people free but to ensure that a defendant attend trial.

He added that the Administration of Criminal Justice Act (ACJA), 2015 holds that bail be granted in the mos liberal terms.


Affen also ordered the defendant to produce two sureties in like sum.

He ordered that the sureties must have landed property in Abuja worth the value of the bail sum.

Justice Affen further ordered the defendant’s counsel, Mr Mark Feese, to put in writing the good characters of the sureties.

He further held that the court registrar would then verify the addresses of the sureties, while the defendant must drop her international passport with the court.

Affen also ordered that pending when the defendant meets the bail conditions, she would be remanded at Suleja Prison.

Earlier, Feese prayed the court to admit his client to bail, arguing that contrary to the submissions of the prosecution, she was granted administrative bail by EFCC and did not jump bail.