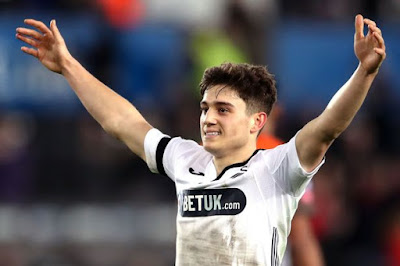 Manchester United announced on Friday they had agreed a deal ‘in principle’ to buy Swansea winger Daniel James, who is set to Ole Gunnar Solskjaer’s first signing at the club.

“Manchester United is delighted to announce that it has agreed, in principle, terms with both Swansea and Daniel James for his transfer to the club,” said a statement on the Premier League side’s official website.

“Daniel has successfully completed a medical at the Aon Training Complex. Further details will be communicated once the international transfer window opens next week.”


The Championship club said the transfer was expected to be formally completed on Tuesday.