Man in court for allegedly stealing crates of beer 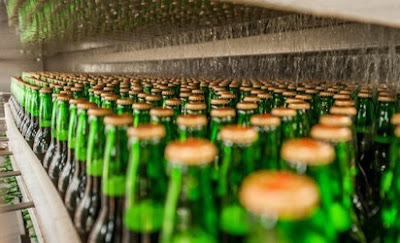 A 50-year-old man, Yusuf Ahmed, who allegedly stole 485 crates of beer, two cartons of Ground Malt and 222 empty crates of soft drinks, worth N2.4 million on Thursday appeared in a Badagry Chief Magistrates’ Court in Lagos.

Ahmed, whose address was not given, is charged with two counts of theft and breach of peace.

The Prosecution Counsel, ASP Clement Okuoimose, told the court that the defendant committed the offence on Feb. 12 at about 11:30p.m at Omoba Depot along Agbara road, Badagry, Lagos. Okuoimose also alleged that the defendant stole N1,3 million cash from the complainant Mr Ifeanyi Omoba’s shop.


He also alleged that the defendant stole 10 cartons of Eagle beer, two cartons of Ground Malt and 222 empty crates of soft drinks.

The prosecution counsel also alleged that the defendant conducted himself in a manner likely to cause a breach of the peace by instigating customers against the complainant.

He said the offence contravened the provisions of sections 287 and 166 of the Criminal Law of Lagos State, 2015. After the charge was read to him, he pleaded not guilty.

The Chief Magistrate, Mr Aka Bashorun, admitted the defendant to bail in the sum of N500,000 with two sureties in like sum.

Bashorun adjourned the case until July 3 for further hearing.