Liverpool fans revel in victory back in club’s home city 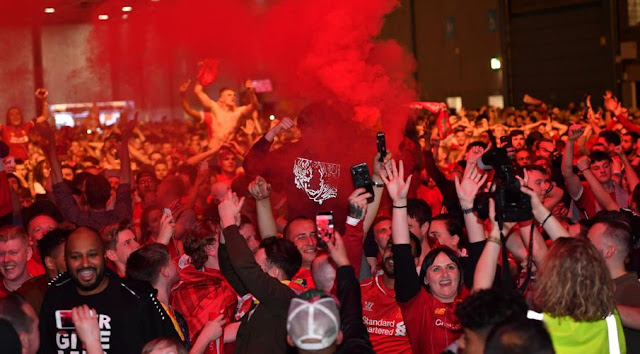 Ecstatic Liverpool fans who watched Saturday’s Champions League final on a big screen on the city’s waterfront erupted with euphoria as their team won Europe’s top football competition — for the sixth time.

“It’s unbelievable!” said Darryl East, 38, a lifelong Liverpool supporter wearing a replica shirt with the name of the game’s first goalscorer Mo Salah on the back, his voice hoarse after 90 minutes of manically chanting and cheering the team on.

“It means absolutely everything… especially after we nearly had it last year,” he added of last season’s disappointment when Liverpool lost to Real Madrid in the final.

Thousands of boisterous, flag-draped fans packed inside Liverpool Exhibition Centre by the River Mersey created a cacophony of noise — and sent beer and smoke from red flares flying through the air — as the final whistle sounded.

Moments earlier they were celebrating the team’s second goal of the night, jumping up and down swinging their scarves above their heads until the game ended.

“The manager’s amazing. This is 100 percent better than last year,” she added as renditions of “You’ll Never Walk Alone” — the club’s legendary anthem — rang out.

Fans from far and wide had swamped the northwestern English city throughout the day, packing its pubs and bars.

While thousands of die-hard Reds were 1,400 kilometres (900 miles) away revelling in the atmosphere in host city Madrid, fans on Merseyside made the best of not being there.

“I couldn’t afford to get to Madrid, but this is the second best place on earth to be,” said Paul Shingler, 52.

A Liverpool supporter old enough to remember their 1981 European Cup triumph in Paris over Real Madrid, he had brought along his 21-year-old son with him from their home in Yorkshire, northern England.

“It’s like nothing you’ve seen before — it’s a sea of red,” the proud dad said as he surveyed the fan-filled city centre mid-afternoon.

As kick-off approached, this football-obsessed city resembled a carnival site, with jubilant supporters — many already intoxicated — climbing street lights and scaffolding to celebrate.

“It’s been an exceptional experience, drinking, singing — the usual stuff,” said Anders Fiskerstrand, 55, a Liverpool fan who had travelled from Norway for the occasion.

The team, which last won the trophy in 2005, will return home promptly for a parade through the city centre scheduled for Sunday afternoon.

He has been selling his 300 special edition flags on the city’s streets since Friday, and is set to sell out Sunday.

“It’s been absolutely mental,” he said of the scenes.