9:45 AM CuteNaija 0 Latest News in Nigeria 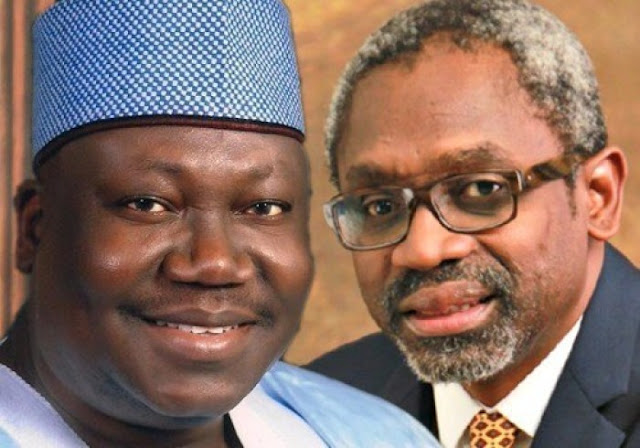 The Majority Leader of the 8th Senate, Ahmad Lawan, and his counterpart in the House of Representatives, Femi Gbajabiamila, on Tuesday emerged as the President of the Senate and the Speaker of the House, respectively.

Both Lawan and Gbajabiamila are members of the ruling All Progressives Congress.


Also, the senator representing Delta Central Senatorial District, Ovie Omo-Agege, was elected the Deputy Senate President with 68 votes, while his challenger who is the immediate occupant of the seat, Ike Ekweremadu, scored 37.

In the Senate, the Clerk to the National Assembly, Mohammed Sani-Omolori, declared that Lawan and Omo-Agege won the election.

The election was almost marred initially by an uproar that erupted when Sani-Omolori, after reading the Presidential proclamation, announced that the election of the presiding officers would be conducted through an open-secret method based on the provisions contained in the 2015 Senate Rule as amended.

A senator-elect from Kano North Senatorial District, Barau Jibrin, had raised a point of order to draw the attention of the clerk to a court order which mandated the management to conduct the election based on the 2011 Senate Rules which provided for open ballot.

His protest was countered by advocates of secret ballot method led by the PDP senators and the development degenerated into a rowdy session which lasted for about five minutes.

The noise invariably fizzled out when Sani-Omolori told the protesters that they had no voice until they were sworn in.

The Head of the National Assembly Management then invited the Clerk of the Senate, Nelson Ayewoh, to take the roll of the senators-elect in attendance, alphabetically starting from Abia State.

At the end of the roll-call, Ayewoh announced that 107 out of the 109 senators-elect were in the chamber.

He said the election should continue because they had undisputedly formed a quorum.

The voting session started at about 10.30am.

An APC senator-elect from Kebbi North, Yahaya Abdullahi, nominated Lawan for the position of the Senate President while his colleague representing Lagos West, Adeola Olamilekan, seconded the nomination.

The clerk asked Lawan if he wanted to accept the nomination and the Yobe North senator noted that his emergence as the Senate President would be an opportunity to work with his colleagues and make use of the institution to provide good governance for Nigerians through legislative intervention.

He said, “As representatives of Nigerians, we are in it together and we need to ensure that the institution provide constitutional support for the government to function.”

The clerk thereafter called for the nomination of any other senator-elect that wanted to contest against Lawan.

The representative of Adamawa North Senatorial District, Ishiaku Abu, thereafter, nominated a member from Borno South, Ndume, for the position of the Senate President while Bari Npigi from Rivers State, seconded the nomination.

Ndume, in his acceptance speech, said he wanted to be senators’ president by dismantling the office of the Senate President and work interdependently with the executive without compromising the constitution.

He pledged to deepen the President Muhammadu Buhari’s agenda, block leakages in budgeting and ensure that the Senate under him would need just three months to pass the budget.

Casting of votes ended at 11.56am and the Clerk to the Senate invited those who nominated the candidates to witness the counting of the ballots.

After the sorting and counting of the polls, Lawan scored 79 votes while Ndume got 28 votes.

The Clerk to the National Assembly announced the results and declared Lawan winner of the election.

The stage was then set for the election of the Deputy Senate President and a senator -elect, Ahmad Baba Kaita, nominated Omo-Agege while Aliyu Sabi Abdullahi seconded his nomination.

Omo-Agege, who accepted his nomination, promised to assist the newly-elected President of the Senate to actualise his dreams.

The former DSP in his acceptance speech noted that he had worked with two former Senate presidents without acrimony.

He lamented that his intention to contest was informed by the need to preserve the sanctity of the legislature.

After the election, Omo-Agege polled 68 votes to defeat Ekweremadu who scored 37.The clerk concluded the inauguration and the election of presiding officers of the ninth Senate at about 2pm.

The new President of the Senate thereafter presided over the swearing-in of other elected senators which was conducted by the Clerk of the Senate.

I’ll be fair to all, senators will be my bosses – Lawan

Lawan in his acceptance speech, pledged to be fair to his colleagues irrespective of their political, ethnic or religious affiliation.

He said, “Elections are over. It shows that we voted for a united Senate and it is clear that the outcome is bipartisan. All parties including the PDP and the Young Peoples Party voted for me and with the outcome, the 9th Senate is ready to take off as a united Senate.

“Today means so many things. It is the commencement of another decade of our democracy and we will work to ensure best global parliamentary practices among other things.”

The Clerk to the National Assembly conducted the House’ polls shortly after the Senate’s. Sani-Omolori then called for nominations for speakership position.

Seconding Jibrin’s motion nominating Gbajabiamila, Mrs Linda Ikpeazu of the PDP said, “I stand to second the nomination of a nation-builder, a man who believes in the unity of this country and is committed towards the attainment of that unity.”

Accepting the nomination, Gbajabiamila said, “With a great sense of humility, I will stand on the nomination address of Honourable Jibrin. I have nothing else to add.”

Also, Abubakar Ahmed from Gombe State, who was booed during his speech, nominated Bago.

Ahmed said, “Today, we are standing at the threshold of his history where sentiment must give way to fact and reason; where morality must guide our conduct; where national interest must supersede personal, partisan or pecuniary interests. The sacred oath of office will soon be administered on us, using that small book that will define our conduct and guide our functions in the next four years.”

Bago accepted the nomination, saying, “This aspiration is not an ambition of Bago.”

After the election, Gbajabiamila won the speakership seat with 281 votes out of the 358 members-elect in attendance, to defeat Bago from Niger State, who got 76 votes. There was one invalid vote. Bago is also a member of the APC.

Earlier, shortly after Bago’s 76 votes were counted, the aspirant proceeded to Gbajabiamila’s seat and hugged the winner and his campaign manager, Jibrin.

Many other lawmakers also approached the new Speaker to congratulate him even while his votes were still being counted.

Gbajabiamila, Jibrin and other loyalists went to embrace the immediate past Speaker, Mr Yakubu Dogara.

Bago, who had shunned the APC’s leadership instructions to step down for Gbajabiamila, also went to the National Chairman of the ruling party, Adams Oshiomhole, and took photographs with him.

The nomination of the APC’s candidate for Deputy Speaker, Mr Idris Wase, was unopposed. He was unanimously adopted by the lawmakers for the seat.

In his speech, Gbajabiamila promised to reform the federal parliament.

He said, “There comes a time in the life and history of a people when they interrogate the past and present, review past sacrifices, miscalculations and errors and collectively decide to opt for change, peace and progress. We are at such a moment in this country. Honourable colleagues of the 9th Assembly, this is our time, this is our moment and history beckons.

“The 9th Assembly under my leadership is going to be a House of reforms or if you like; a reform Assembly. The reforms will be dished out piecemeal and at intervals so as not to shock the system. Moving forward, therefore my dear colleagues, it will not be business as usual and we will be shaking the table just a little.”