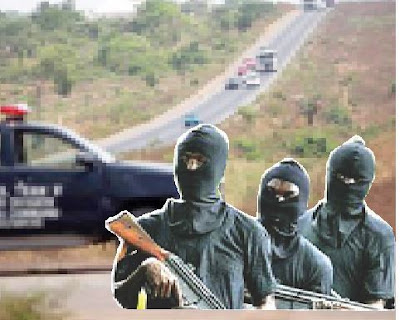 No fewer than 133 highways across the six geopolitical zones in Nigeria have been identified as major flashpoints for kidnapping, banditry and other violent acts.

If you are travelling on these roads, chances are that you may be robbed, abducted, maimed or even killed. In the last six months, there is virtually no week that people do not have horrific experiences on these routes in the hands of suspected herdsmen, armed robbers, kidnappers or ritualists.

Investigations by our correspondent found 11 spots across the five states in the South-East geopolitical zone, while 41 hotbeds were found to exist in the South-West geopolitical zone. Dangerous spots  In the South-South, 28 major theatres of operation were discovered with nine coming from one particular state. 20 dangerous roads and spots were observed by Sunday Vanguard in the North-West zone. No fewer than 33 volatile roads were observed across affected states in the North-Central.

Aside the general insecurity in the North-East following terrorist activities, two roads were found to be notorious for kidnapping. A breakdown of the pieces of information gathered by our reporters from across the country reveal that apart from the identified areas, criminal activities take place in other parts of affected states.


The specifics show that there is little or no presence of security agents in places where crimes like kidnapping and banditry occur.

Oftentimes, security personnel arrive at such places after suspected criminals must have concluded their operations. The patterns of operation are similar in many places while the setting of crime determines the method to be applied by perpetrators in some areas.

A further breakdown shows that many major highways in the South-West have been taken over by kidnappers, herdsmen, ritualists and rapists. It is now dangerous to travel along such roads after 5pm. In Osun and Ekiti states, affected roads include Esa-Oke Junction; Iwaraja-Efon Alaaye; Ile-Ife junction; Iloko Junction; Ipetu-Ile – Ilesha; Ilesha-Ile-Oluji; Ilesha -Osogbo and Ilesha- Akure. On these roads, vehicles are waylaid by bandits while unsuspecting commuters are sometimes abducted.

The roads where kidnapping and banditry have become commonplace include Auga Road in Akoko where no fewer than 20 kidnappings have occurred in the last three months. Others roads are Akure- ljare; Akure-Owo- Oba Akoko- Akungba; Oka Akoko – lsua Akoko; lpele- Ido Ani; Ondo-Ore; Ondo-Akure and Akure-Benin. Kidnappers and bandits operating on these roads are most of the time armed with sophisticated weapons while sometimes dressing in police or army uniforms. Akoko area currently records the highest cases of kidnapping in the state. Further findings by Sunday Vanguard reveal that some of the roads are in dilapidated state thus making it possible for criminals to operate successfully. Many people have been kidnapped on these roads including traditional rulers and their wives. Only recently, Governor Rotimi Akeredolu’s convoy was reportedly attacked by kidnappers on one of the roads. Ogun: No fewer than nine roads were found to have been made unsafe by the activities of kidnappers in Ogun State. The roads include Siun-Ogere; Obafemi-Owode; Abeokuta-Lagos; Abeokuta-Sokoto; Ilaro-Owode-Idi-Iroko; Odeda-Ogunmakin; Fidiwo-Obafemi; Sagamu-Ogijo-Badary; and Ijebu Igbo-Oru-Awa. Many people including eminent Nigerians like Senator Iyabo Anisulowo; wife of a former Speaker of Osun State House of Assembly, Alhaja Muibat Salam; wife of a lawmaker, Mrs Folashade Onademuren; and a Canadian been kidnapped at various times on some of these roads in Ogun. Efforts to get the number of kidnapping/banditry cases in the state were not successful as the Ogun State Police Command Public Relations Officer, Abimbola Oyeyemi, pleaded for time to gather the data. Ekiti: In Ekiti State, Ikere-Akure Road and communities like Iyemero, Ayede and Oloje have become theatres of operation for the harbingers of death who disguise as herdsmen. The criminals rape, abduct and kill. The spate of insecurity is a matter of concern to many natives of the state like the Secretary of the Yoruba Council of Elders, Dr. Kunle Olajide. Surprisingly, the police in Ekiti seem to be living in denial as they acknowledged only two incidents. Speaking to Sunday Vanguard last Wednesday, the Public Relations Officer, PRO, of the state Command, Mr. Caleb Ikechukwu, said: “The Command is doing its best to ensure that our roads are safe for commuters. Safer Highway Patrol Teams and the Rapid Response Squad, RRS, have been deployed. Our roads are safe.’’ On his part, Governor Kayode Fayemi recently expressed the need to re-strategise and involve traditional rulers, vigilantes and hunters in border towns in the state in the new security architecture. Traditional rulers of towns sharing boundary with neighbouring states were mandated to work with security agencies.

The activities of kidnappers are mainly prevalent on Ife-Ibadan Road and Oke Ogun roads. We also learned that Ilorin-Ogbomoso Road is a major theatre of operation for kidnappers and armed robbers. Some roads in Atisbo Local Government Area of the state were also found unsafe as a result of kidnapping by suspected herdsmen. When we tried to reach Oyo State Police Command Public Relations Officer, Mr Gbenga Fadeyi, for comments on the issue, he did not pick his calls. Edo: Major roads across the three senatorial districts of Edo State regularly record cases of kidnapping. In Edo-South, areas that have assumed notoriety for kidnapping include Upper Sokponba, Ehor axis of the Benin-Auchi Road; Ogbemudia Farm; Okada along Benin –Ore-Lagos Road and Avbiama in Ikpoba Okha Local Government Area, LGA. In Edo Central, kidnapping is common along Ubiaja-Ewohimi-Agbor Road, while roads across the six LGAs in Edo North regularly record cases of kidnapping by suspected herdsmen. East-West Road The most dreaded road in the South-South is East-West Road. The federal road, which transverses the six states of the oil-rich region, is now seen by many as an expressway of terror and death. Anyone safely passing through the Delta, Bayelsa, and Rivers states axis of the road must count himself lucky. From all the Eastern gateways of the road to Akwa Ibom, unlucky passengers have ugly stories to tell every day. The roads identified as major flashpoints in Rivers State include Emohua-Elele-Alimini axis of the East-West Road; Isiokpo-Elele axis of the Port Harcourt-Owerri Road; Omagwa – Ubima; Isiokpo- Ubima; Elele -Umudioga; Egbeda, Ubima, Omoku, and Elele-Ndele Rumuji-Emuoha-Choba -Port Harcourt roads.

It was observed that no fewer than seven roads are dreaded because of kidnapping and banditry in Delta State. Kidnappers suspected to be herdsmen have turned the Edo-Ogwashi-Otulu-Atuma-Akwukwu-Igbo Road, which used to be a quiet stretch, into a death zone. The same applies to Ebu-Ukala-Onicha-Olona Road. Also, Issele-Uku-Otulu Road and Issele-Uku-Onicha-Olona Roads have become deadly given the activities of kidnappers. Issele-Uku-Ubulu-Uku Road, where kidnappers abducted a royal father and killed him a few years ago, remains an infamous route to ply. Umutu –Urhonigbe-Abavo and Ekuku- Agbor roads are also notorious. Ode Bridge axis Other roads include Okurekpo community road in Ethiope East LGA. The Ode Bridge axis in Ethiope East has become a place where suspected herdsmen kill and rape. On Bomadi-Ohoror Road, the activities of bandits and herdsmen who kill and maim commuters have become worrisome. The road traverses four local government areas of Delta namely Bomadi, Patani, Ughelli South and Ughelli North. Agadama community women told our correspondent that they were often raped by herdsmen in their farms along Agadama road. Urhonigbe portion of the Agbor-Obiaruku-Abraka-Warri Road was also found to be another area of concern. In addition, it was gathered that herdsmen operate a thriving kidnap network between Umutu, Urhonigbe and Abavo communities.

Some major roads in Katsina State are now deserted for fear of attacks by armed bandits and kidnappers. The roads include Jibia – Gurbi – Kaura Namoda; Dutsinma – Kankara – Sheme – Faskari; Musawa – Matazu; Charanchi-Kankia-Kusada; Dandume – Sabuwa; Sheme – Kankara and Dutsinma – Funtua which many motorists avoid between 6pm and 6am. Jibia – Gurbi – Kaura Namoda Road which links Katsina and Zamfara states is, according to residents the most dreadful. When contacted, the spokesperson for Katsina State Police Command, Superintendent of Police Gambo Isah, however, said the security situation has improved on major highways and other roads across the state. He said: “The highways in the state are now safe but the Police Commissioner, Sanusi Buba, is not relenting in his efforts. He has deployed officers and men as well as operational vehicles to the highways to ensure that the roads are safe. Divisional Police Officers, DPOs, have also been mandated to create nipping points.’’

In Kaduna State, findings by Sunday Vanguard showed that virtually all the sections of the Kaduna/Abuja Expressway are being terrorised by kidnappers. Other roads specifically identified as territories where abductors carry out their acts are Birnin Gwari-Kaduna Road; Kaduna- Saminaka-Jos Road; Kaduna-Kachia Road; Kagarko-Jere Road; Birinin Gwari-Kagara-Tegina Road; Sarkin Power-Birnin Gwari route; and Minna-Lambata-Diko-Kaduna axis.

Apart from kidnapping, banditry has made Gusau-Magami-Dansadau, Kuceri-Danjibga-Keta-Wanke, Kaura- Namoda -Moriki-Shinkafi, Zurmi-Jibia – Katsina, and Talata Mafara/Tsafe roads unsafe. In Sokoto State, roads in Issa and Rabah LGAs are dangerous as a result of banditry.

The spots where kidnapping mostly occurs in the state are Enugu-Ugwogo-Nsukka Road; Nsukka-Adani-Onitsha Road; 9th Mile-Nsukka-Makurdi Road; Enugu-Onitsha Expressway, particularly at Ugwu-Onyeama valley; and Enugu-Port Harcourt Road. Kidnapping is yet to abate at Ukpabi-Nimbo community in Uzo-Uwani LGA, which is lonely, bushy and surrounded by forests where victims are taken to oftentimes. So many arrests of members of different kidnap gangs identified as ‘Malaysia Boys’ and ‘Ndi Ishiawo’ have been made in the area. Suspected herdsmen were said to be responsible for the cases at Ugwu-Onyeama along Enugu-Onitsha Road.

Some of the roads where kidnappers often operate include Enugu-Abakaliki Expressway; Abakaliki-Afikpo Expressway; Amasiri-Okigwe Expressway; Ivo-Oso Edda Road and some roads linking the hinterlands in the state.

The Sankera axis comprising three LGAs, Katsina/Ala, Ukum and Logo LGAs, have had to contend with issues of kidnappings which usually occur on the over 150km stretch of Katsina/Ala – Wukari Road linking Benue and Taraba states.

Also, Wukari-Takum and Wukari-Ibbi roads in Taraba State are notorious for kidnapping.