Kebbi acting chief judge: Bagudu failed to confirm me for being Christian 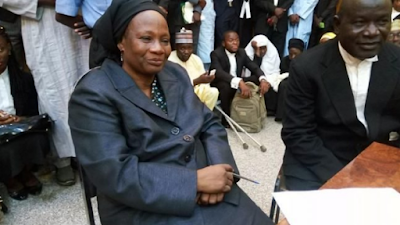 Elizabeth Karatu, acting chief judge of Kebbi state, has accused Atiku Bagudu, the governor, of refusing to confirm her as substantive judge because of her religious affiliation.

According to Daily Nigerian, Karatu petitioned the National Judicial Council (NJC) over the issue.

Karatu was appointed by Bagudu on October 30, 2017, following the retirement of Bala Mairiga.

He recommended her to the state house of assembly as a replacement for Mairiga but the lawmakers were said to have refused to confirm her appointment over alleged falsification of her primary school certificate.

“This Honorable House will not clear any nominee who comes before it with altered credentials. It is now left for the government to decide on who to send as a nominee to the House,” Abdulmumin Kamba, speaker of the house, had said.

On November 14, 2018, Bagudu resubmitted Karatu’s name to the house for confirmation.

Karatu was reportedly confirmed on January 17, 2019, but the governor refused to act on the assembly’s confirmation.

Karatu is due to retire on July 5 from active service.

“After the retirement of Justice Ibrahim Bala, I was sworn in as Acting Chief Judge being the most Senior Judge. However, before my confirmation, Justice Ambursa engaged in trading with the Governor and the Speaker of the House of Assembly and indeed to the public that I was sponsored by the Christians Association of Nigeria to serve the Christendom,” the petition read.

“He spent a lot of money in forestalling my confirmation at the House, and eventually the house rejected me on the ground of alteration on my certificate which I believed must have been cooked by Justice Ambursa.

“I have been working for 35 years up to the rank of Permanent Secretary and later became a Judge but Justice Ambursa has never complained about my religion, in fact most of his victims are Muslims rather than Christians. I therefore believe that he is just using religion for his person gain. I was a Muslim before and all my Children are still devoted Muslims. I know what Islam is all about; it is religion of peace, fairness and Justice.”

She also reportedly said Mohammed Ambursa, the judge appointed to replace her, played a plot in frustrating her confirmation.

She accused Ramatu Gulma, the state attorney general and “an ally to Justice Ambursa”, of sabotaging the committee of reconciliation set up by the NJC in May to prevail on the governor to confirm her.

According to her, Gulma purportedly painted her as an enemy of the government “because I ordered the detention of family members of the Vice President, Yemi Osinbajo who were suspected to have committed the offence Fraud of Millions of Naira before Chief Magistrate Court in Birnin Kebbi”.

Daily Nigerian quoted Babale Yauri, secretary to the state government, as saying Bagudu refused to confirm Karatu because of “some discrepancies in her credentials” and not her religion.

Yauri added that the letter purportedly sent to the governor by the state assembly is fake as it was not duly signed.