8:19 AM CuteNaija 0 Nigerians in Diaspora, Sports 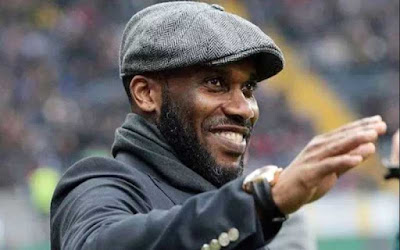 Nigerian football legend, Jay Jay Okocha has been charged to court in relation to alleged acquisition, use and possession of criminal property and another relating to allegedly concealing, disguising, converting and transferring criminal property.

The Nigerian footballer who appeared in private at Aberdeen Sheriff Court on Friday, faced two charges in thegujma behind-closed-doors hearing. The appearance relates to alleged incidents said to have happened in the north-east of Scotland in 2015.


The appearance relates to alleged incidents said to have happened in the north-east of Scotland in 2015.

Though Okocha made no plea during the hearing, the retired footballer, whose general address was given as Milton Keynes, Buckinghamshire, was granted bail. No date has yet been fixed for his next court appearance.

Jay Jay Okocha was a professional footballer who played as an attacking midfielder for Nigeria’s Super Eagles team. Okocha was known for his confidence with the ball, technique, creativity, and dribbling skills, as well as his use of feints, in particular the stepover.