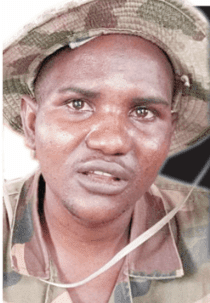 A suspected kidnapper, Sani Haruna aka Gayu, who was arrested by the Inspector General of Police special team has confessed that he has lost count of the number of people he killed for failing to pay ransom.

In an interview at one of the safe locations in Abuja where he is being held, the 20-year-old father of two said he did not take part in kidnapping, adding that he was in charge of the security of the kidnapped victims.

He said he was the one who was detailed to kill any of the victims who was unable to pay a ransom as demanded by his boss.

He said since he was in charge of securing the victims and killing them if they failed to pay the ransom, he was trained by his boss on how to handle weapons, especially AK 47 which he described as the choice weapon of the kidnappers.


Sani Haruna, who spoke in Hausa, however, begged the Federal Government to give him a second chance to join forces with the police to fish out other kidnappers operating in Katsina, Zamfara, and Kaduna-Abuja highway axis of the country.

“My name is Sani Haruna. I am the guard for kidnapped persons where they were kept in the bush in Katsina State. I have been doing that for one year. Before joining this, I was a herdsman. It was from herding cows that I was invited to be guarding kidnapped victims by one of the commanders.”

He said he was recruited into the kidnap ring when he approached one of the commanders to inform him that he was looking for a job after losing his cows to rustlers.

Haruna added that he was trained to handle guns, noting that he was given a military camouflage uniform in his new role as a guard.

Asked how many people he killed in the last one year while working as a kidnapper, Haruna said: “ In  God’s name, I have lost count because I don’t keep a record of the people I kill but I know they are many”.

He, however, said on the day he was arrested, he had already killed three people within the interval of three days.

Asked why he killed them, he said his superiors told him that if the kidnap victims were not killed, they would kill him.

“Even when I didn’t want to kill them, I was always afraid because it could amount to disobeying the directive of my boss. I might even be killed,” he said.

He added that amongst the kidnappers, there was a sheik in charge of preparing corpses for burial according to Islamic rites.

“The mallam will prepare them according to Islamic rites, pray for their souls and we will bury them properly,” he said.

He said though he was married with a child, his wife was not aware of his criminal activities because he never disclosed them to her.

The suspect said the military uniform he wore and the arms he carried were provided by his bosses.

He said he knew what he was doing was bad but he was afraid of leaving them because he would have been killed.

Asked what his appeal to government and the police was, he said if he regained freedom, he would join hands with the police to fish out other kidnappers since he knew their modus operandi and where they are based.

It would be recalled that Haruna was earlier paraded on June 3, 2019, by the police as one of those arrested by the Police Special Tactical Team (STS) led by Deputy Commissioner of Police, DCP Kolo and IGP’s Intelligence Response Team (IRT) commanded by DCP Abba Kyari.

The arrests were in pursuant to Operation Puff Adder launched to hunt kidnappers, bandits, cattle rustlers, and armed robbers.

During the parade, some of the suspects were alleged to have smuggled thousands of rifles and ammunition into Nigeria from Libya and Burkina Faso through Benin Republic and Niger Republic.  6000 Rounds of Ak47 ammunition and several Ak47 rifles and pistols were recovered.

The suspects confessed to importing and selling rifles and ammunition to kidnappers, armed robbers and other criminals in Nigeria.