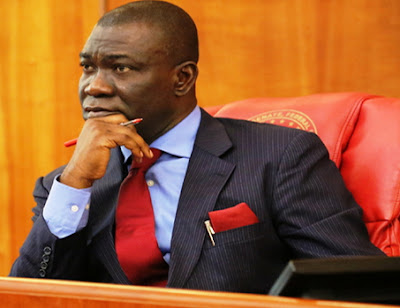 A former Deputy President of the Senate, Ike Ekweremadu, has said the constitution amendments carried out by the 8th National Assembly had substantially addressed the problem of proliferation of political parties in Nigeria.

Ekweremadu, who was also the chairman of the Senate Committee on Constitution Review for 12 years, stated this in a statement on Tuesday and signed by his media aide, Uche Anichukwu.

He expressed surprise at a recent statement credited to the Independent National Electoral Commission, Commissioner in charge of Nasarawa, Kogi, and Kwara States, Muhammed Haruna, that the electoral body lacked the powers to de-register political parties without further constitution amendments.

The lawmaker said what INEC needed to do was to look at the provisions of the Constitution of the Federal Republic of Nigeria, 1999 (Fourth Alteration, No. 9) Act published in Official Gazette No. 77 Vol. 105 to be well guided.


He insisted that the latest amendments, duly assented to by President Muhammadu Buhari, spelt out various reasons that can make the electoral umpire deregister political parties.

Ekweremadu said, “The size of our political parties constitutes a logistical challenge to the election management body.

“More electorate now find it difficult to identify the logos of their preferred political parties.

“The ballots and result sheets are getting too long and unwieldy.  It also has cost and time implications on elections.

“However, I believe INEC’s concern has already been substantially addressed by the 1999 Constitution as amended by the 8th National Assembly and assented by President Muhammadu Buhari.

“We inserted a new Section 225A, which provides that the INEC shall have the power to deregister political parties for breach of any of the requirements for registration and failure to win at least 25 percent of votes cast in one state of the federation in a presidential election or 25 percent of votes cast in at least one local government in a governorship election.

“So, it is incumbent on INEC to filter out and de-register those political parties that appeared on the presidential election ballot but did not garner at least 25 percent of votes in at least one state of the federation.

“It should also look at parties that contested election in the states and de-register those political parties that did not poll up to 25 percent of votes in at least one local government area in those states they contested an election.

“The idea is to encourage political parties to see an election as a serious democratic exercise and to confine themselves to the level of election they have reasonable structures, support base, and resources to win or show substantial strength; otherwise our elections will become unmanageable at a point”.