In his next life, he’ll respect elders - Son kills neighbour for insulting his dad 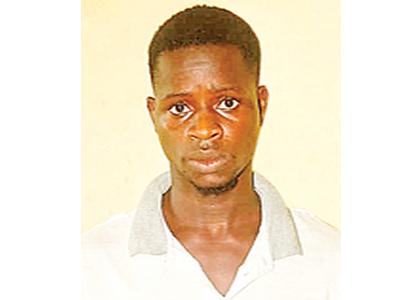 The Niger state police command have arrested 23-year-old John Joshua, pictured above, for allegedly killing his neighbour, Yohanna Alli, following a misunderstanding between the deceased and John's father, Umar Parage.

According to the police, Joshua's father had a misunderstanding with Alli's father sometime in May. During their quarrel, Alli disrespected Joshua's dad and when Joshua heard what happened, he confronted Alli.

During the confrontation, Alli showed no sign of remorse and even asked what Joshua would do. In anger, Joshua stabbed Alli in the stomach which led to his death.

When interrogated, Joshua said when next Alli comes to the world, he would learn how to respect his elders.

''I killed him because he insulted my father. He forgot that I would confront him. I have never insulted his father before, so why should he disrespect my father?

When I confronted him, he did not show any remorse, rather he asked what I would do. So, I stabbed him in his ribs, which caused his death. For this disrespectful act, in his next world, he wouldn’t disrespect elders.” he said

The police say the suspect would be charged to court soon.