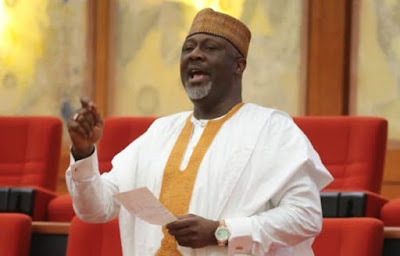 The Kogi West senator, Dino Melaye, on Thursday said he spent 124 days in police custody in 2018 in his various confrontations with the authorities.

He also said the day hoodlums invaded the Senate will remain a sad one for him.

Mr Melaye said this when he spoke during the Senate’s valedictory session.

The senator started by praising the doggedness of the Senate President, Bukola Saraki, who has been his close ally since the beginning of the 8th Senate.

He also recalled how he spent over 100 days in police custody in 2018.

“I want to thank God Almighty who is the Supreme controller for making me alive to be here today,” he said. “You will recall severally Mr President, I address you as the irremovable President of the Nigerian Senate when the seat of power took you to Code of Conduct Bureau when the state petitioned you and took you to court and established a case of forgery against you. Today, you are not just completing your term but you have a glorious exit against the imagination of some demons.

“I campaigned only four days to the election. I have every cause to glorify God. Last year, I was arraigned in different courts, Federal Government versus Dino Melaye, but here am I, standing, and returned undisputedly as the senator of the Federal Republic of Nigeria.”

For him, the day Mr Saraki emerged as Senate President “would be recorded on the high while he’ll remember the day the chamber was invaded as a sad one”.

“I have two historical days I will never forget in the history of the 8th Senate. One is a day of joy and merriment and the other is a day of sorrow. The day of joy is the day Bukola Saraki became the President of the Nigerian Senate and Ike Ekweremadu became the Deputy Senate President.

Mr Melaye also vowed to work against ‘presidential’ and ‘party’ orders against the interest of the country.

“Nigeria will continue to be ahead of any political permutations. Nigeria shall come first before anything selfish interest. I will ensure that and that we stand by that. Enough of presidential orders and party directives. Any order that is contrary to the progress, unity and prosperity of Nigeria should not be entertained on the floor of the Senate.”