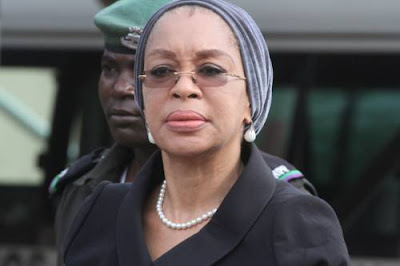 Justice Rita Ofili-Ajumogobia, who has been reportedly sacked by the Federal Government, claimed on Monday that she was still a serving judge of the Federal High Court.

Ofili-Ajumogobia made the claim when she appeared before Justice Rilwan Aikawa of the Federal High Court, Lagos, where she is charged with unlawful enrichment and money laundering.

The judge, through her counsel, Chief Robert Clarke, moved her application to challenge the jurisdiction of the court to hear her trial, noting that the President’s approval for her dismissal had not been gazetted.

The Economic and Financial Crimes Commission had re-arraigned Justice Ofili-Ajumogobia and Godwin Obla on 18 counts, to which they pleaded not guilty before Justice Justice Rilwan Aikawa.


The re-arraignment came after Justice Hakeem Oshodi of the Lagos State High Court in Ikeja struck out the 30 counts, bordering on the same offences which the EFCC filed against the judge in 2016.

Justice Oshodi struck out the 30 counts against Justice Ofili-Ajumogobia and her co-accused, Obla, following an application by the EFCC for the withdrawal of the charges.

The EFCC said it withdrew the 30 counts to comply with the Court of Appeal’s decision in Justice Nganjiwa’s case that a serving judge could not be prosecuted except he or she had been investigated, found guilty and sanctioned by the National Judicial Council.

After filing the earlier 30 counts before Justice Oshodi, the EFCC later filed a petition against Justice Ofili-Ajumogobia before the NJC.

Upon considering the petition, the NJC found her guilty and recommended her to President Muhammadu Buhari for dismissal from the Federal High Court bench.

The EFCC said the NJC’s decision paved the way to prosecute her in line with the appellate court’s decision in Justice Hyeladzira Nganjiwa’s case.

At the Monday proceedings, Ofili-Ajumogobia’s counsel, Clarke while moving his application on the preliminary objection however noted that his client was still a judge of the Federal High Court and could not be tried in line with the precedent set in the case of Nganjiwa.

According to him, the letter presented by the EFCC, which was purportedly written and sent by the President to the Chief Justice of Nigeria, giving approval for her sack in line with the NJC’s recommendation was not enough to satisfy Section 106(ai) of the Evidence Act 2011 which provides that an official communication of the government of the federation has to be produced in a gazette.

He said, “We filed a preliminary objection challenging the jurisdiction of this court to hear this trial or any other trial concerning Justice Ajumogobia. The basis of this application is that she is still a judge of the Federal High Court. An acknowledgment of that fact caused her trial to be struck out at the Lagos High Court, Ikeja based on Nganjiwas case which is still pending at the appeal court.

“The sole issue here is whether the charge is competent but the EFCC has brought in Exhibit EFCC 2 which according to them is a letter giving approval for the NJC’s recommendation. The court has to determine the status of Exhibit EFCC 2 to see whether it is a document that can be tendered and admitted in this proceeding and when admitted, what evidential value can be ascribed to it.

“The exhibit was addressed to the CJN in his capacity as the CJN and not to the chairman of the Judicial Service Commission and thus makes it a private document because the document itself was marked by the President signing and marking it restricted. Having been marked by the maker as restricted means it cannot be used by a third party for any purpose.”

Based on his argument, he concluded that Exhibit EFCC 2 could not be used for any purpose, that the prosecutors had failed to show that Justice Ofili-Ajumogobia was no longer a judge of the Federal High Court.

Responding, the EFCC counsel, Rotimi Oyedepo, told the court it had jurisdiction to hear the case, especially as the first defendant was no longer a serving judicial officer when the instant charge was filed.

Oyedepo urged the court to rely on the exhibits by the EFCC before the court and to dismiss Ajumogobia’s application, arguing that her preliminary objection did not raise the issue of gazette

In his reaction, Obla, through his counsel, Ifedayo Adedipe, urged the court to quash the charge against him or strike out count one, two and three for being an abuse of court process.

He said, “The whole essence of the judicial process is for an orderly society but where it is used to persecute or oppress, the court has the power to refuse the same. This case is a persecution of the second defendant.

“The defendant appeared before Justice Hakeem Oshodi for three years and made a no case submission and the court did not rule, instead it withdrew from the matter saying it lacked jurisdiction. We are on appeal and our brief of notice of appeal and brief of arguments are before this court.

“So, we want the court to quash counts one, two and three that concerns the second defendant but if the court thinks otherwise, then it should sever the charge. We want our liberty. We don’t want to be hurled before another court if this court finds that it lacks jurisdiction.”

Responding, Oyedepo said, “The prosecution opposes this application and we urge the court to dismiss same. The second defendant has exhibited the charge before the Ikeja court as Exhibit A and I urge the court to compare the same, it is not the same charge. They are different in form and substance.”

Justice Aikawa after listening to the parties adjourned till June 28 for ruling on the preliminary objection.