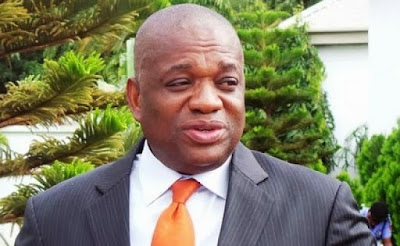 A former Abia state governor, Orji Kalu, who is representing Abia North Senatorial District, has advised the people of the Southeast to come together and take their place in mainstream national politics.

The former Abia governor said that the decision-making process in Nigeria is something Ndigbo must intentional be a part of, and shouldn’t leave their fate in the hands of other Nigerians.

The Senator said this on Saturday during a ceremony he organised in his Camp Neya country home in Igbere, Bende Local Government Area of the state, to thank his constituents for voting for him.
Kalu described Ndigbo as Nigerians who travel the most, having several investments in every part of the country.

He also decried the fact that the region doesn’t support the APC in 2019 presidential election, hence are suffering from that decision now.

He said: “Our people did not support APC. We did not vote for the president and that is what we are paying for.

“We are not entitled to anything when we did not vote for APC so we cannot ask for the Senate President or Deputy President.

Kalu also said that the country would experience better under the Muhammadu Buhari led government.

He said, “Nigeria has a brighter future under President Buhari. I see darkness giving way to light. ”

“Nigeria is one and, in spite of our diversity, we must strive to remain one united nation,” he added.

The lawmaker also informed his constituents of why he stepped down his aspiration to be the Deputy Senate President.

He said: “I have to respect the party’s decision on the zoning of principal offices at the National Assembly because the supremacy of the party must be respected.

“I stepped down because I cannot disobey the president and Comrade Adams Oshiomhole, the National Chairman of the All Progressives Congress (APC).

He thanked the people of his constituency while promising that he would all in his power to attract the dividend of democracy to his people.