I am not a weak Governor - Obaseki cries out 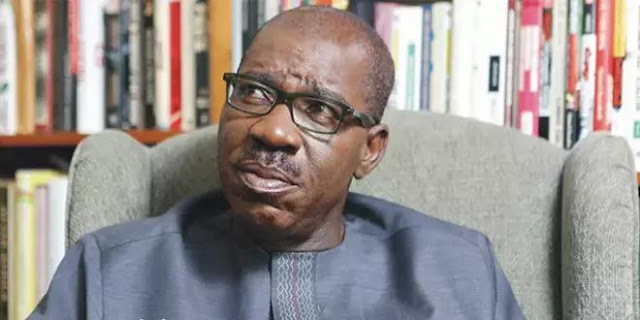 He however said he would respond to opponents of second term with positive works adding that ‘Never again will the food of the children be given to the dogs.

The governor spoke when the Nigeria Labour Congress, National Union of Local Government Employees (NULGE) National Butchers Union, Market Women, National Union of Road Transport Workers (NURTW) youths and students held a protest march to endorse him for second term. Obaseki who was represented by the state’s Commissioner for Communication and Orientation, Barr.


Paul Ohonbamu, said the social contract he entered with the people in 2016 was being fulfilled across the state. According to him:“Obaseki is a development warrior. He wants to create an alternate society where honour will be given to men and women who deserve it and not those who bought them.

“Obaseki believes that the wealth of a state is not measured by the opulence of rulers of that state but the productivity of the people of the state. People are not comfortable with the process he is adopting.

“The process of changing the fortunes of Edo people is being opposed. It is a system that can create winners and losers in the political arena and economy market place.

Read also: Edo 2020: Strange fellows swell Obaseki’s camp
They are not comfortable because the type of politics Obaseki is playing is too sophisticated for them.

“Obaseki has said he will continue to be an agent of the people. You must see the government as your agent to do that which you desire in line with legitimate expectation.

“This fight is not Obaseki’s fight. The people put him there. He has the legitimate votes from the people and he cannot betray the trust.

The goodwill cannot be squandered.” Chairman of NURTW, Comrade Odion Olaye, said the massive road network done by the Obaseki led government was beneficial to the drivers.

Olaye said they would support Obaseki for second term. Two factions of NULGE leadership in the state led by Comrade Lazarus Adorolo and Comrade Gideon Akpata were in agreement in their support for Obaseki.

They said the increased IGR for the 18 local governments has led to prompt payment of salaries and arrears. Comrade Barry Osayande who spoke on behalf of the NLC said they were satisfied with the performance of Obaseki. “We live in Edo and we see the developmental strides of Obaseki. We are with him. The working class of the state is with Obaseki.