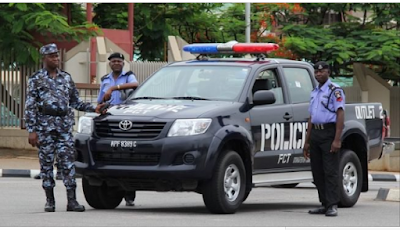 A 21-year-old man, Chukwubuike Onuoha, has been shot dead by a police sergeant identified as Collins Akpugo.

Mr. Akpugo is said to be attached to the Special Protection Unit (SPU) of the Nigeria Police Force, Abia State Command.

This newspaper gathered that the incident occurred on Monday night while the deceased was standing in front of his father’s compound with other persons, including his brother.


Speaking on how the killing happened, witnesses said Mr Onuoha was shot after he complained about how the police officer flashed his Toyota Hilux van’s light on them.

Rather than dim the light, the officer who was believed to be drunk alighted from his vehicle and shot Mr Onuoha on the shoulder.

It was gathered that efforts by other persons around including the deceased’s brother to challenge the police officer failed as he threatened them with his gun. He later shot the deceased, lying on the floor, on his chest, left his vehicle and ran away.

One of the witnesses, Okiroro Stephen, who spoke late Tuesday night, said: “He was drunk when he (the police) carried out the act. He was merely told by the youth to dim his full light. Instead, he wasted the life of Chukwubuike and ran away.”

It was also learnt that residents of the area, on Tuesday, stormed major roads in the Abia capital to protest the killing of their colleague.

Speaking to journalists during the protest, Ngozi Ogbonna, a woman leader from the community, who led the protesters, said: “We know Collins very well, he is a tenant in our community. He (the police officer) killed our son for no just cause. He was confirmed dead at the Federal Medical Centre, Umuahia, this morning (Tuesday)”.

“We have gone to the government to complain; we are also going to the police command to express our grievances to them. All we want is justice in this matter”, she was quoted.

Confirming the incident, the state police spokesperson, Geoffrey Ogbonna, said the commissioner of police, Okon Enen, has ordered the investigation of matter and also sent some delegates to the deceased family to commiserate with them.

Before now, the Inspector-General of Police, Mohammed Adamu, while condemning the incessant killing of innocent citizens, said extrajudicial killing is unacceptable.

“…Aside negating our professional calling, extrajudicial acts of any description or level by any police personnel is an unacceptable anomaly that creates disdain between the citizens and their police and widen the trust gap between them,’’ he said.

He warned that any police personnel that engages in abuse of his or her powers or misuses weapons in utter disregard to statutory provisions would be arrested.

“The person will be investigated through our internal disciplinary machinery and if found culpable, shall be dismissed from service. In addition, such personnel will be charged to court for murder or sundry offences depending on his or her level of criminal liability in the instance.”

“Furthermore, the line supervisors of such officer, including the Area Commander, Divisional Police Officer or Sectional Head, shall be held vicariously liable for lacking supervision and shall be similarly sanctioned,” the police chief said.