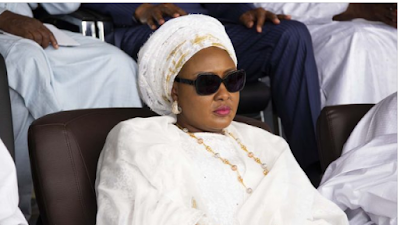 Aisha Buhari, first lady, on Thursday threw her weight behind some aggrieved members of the All Progressives Congress (APC) who opposed Senate President Ahmad Lawan’s appointments.

The senate  president had appointed Festus Adedayo, a columnist, as his spokesman, and also retained some aides of Bukola Saraki, his predecessor.

But some members of the APC kicked, saying especially Adedayo had been too critical of the ruling party and President Muhammadu Buhari.

On Thursday morning, a group known as APC stakeholders, had accused the senate president of rewarding enemies of  Buhari’s government.

Ayo Oyalowo, a social media influencer who tweets @Ayorub, was among those members of the group who spoke against Lawan’s appointment at a press conference in Abuja.

In a move suggesting that she is in support of the position of the group, Aisha tweeted a quote of Oyalowo at the press conference.

“You cannot drive an agenda with people who don’t believe in that agenda…how will you achieve your purpose If you bring in people who fought against your agenda. – @Ayourb.  #APCYouths #MissionandVision #BelieveinBuharisIdeology,” she tweeted.

"You cannot drive an agenda with people who don't believe in that agenda...how will you achieve your purpose If you bring in people who fought against your agenda."

Oyalowo had earlier told journalists: “It is not about appointments as it were, it is about the fact that there is an agenda called – initially the change agenda now the next level agenda.”

Lawan has since withdrawn the appointment of Adedayo.