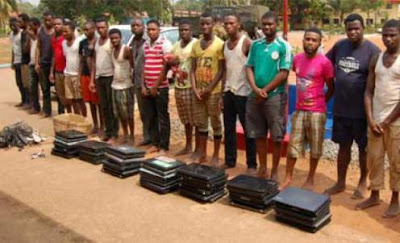 The Ghana Immigration Service (GIS) has deported 17 out of 29 persons arrested in Ho, the Volta Regional capital for their alleged involvement in cyber crimes, known in Nigeria as ‘yahoo, yahoo’.

According to The Ghanaian Times, the Nigerians were handed over to the GIS for screening, following their arrest to determine their immigration status.

The Ho Municipal Police Commander, DSP Anthony Danso, who briefed the Times on Tuesday, said it emerged that the deported persons did not have good immigration standing.

Those who were found to be legal residents of Ho, were released and reunited with their various communities.


Danso noted that some landlords leased houses to some Nigerians, who in turn used them for various nefarious activities, including cyber fraud.

During the raid, the police retrieved 33 laptop computers, two television sets, one wireless router and 20 cell phones as well some electronic gadgets.