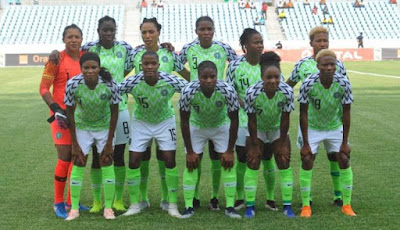 Nigeria’s Super Falcons will know today whether they would progress for the first time, in 20 years to the Round of 16 in the FIFA Women’s World Cup taking place in France.

Nigeria finished third in Group A with three points and minus two goals, opening a chance to progress as one of the four best third-placed teams, to join the 12 that qualified as the two-best in the six groups.

Two of the spots have been taken already by China and Brazil. China finished third in Group B on the same four points, with second-placed Spain. Brazil also finished third with six points in Group C, sharing same points with first-placed Italy and runners-up Australia.

Argentina in Group D opened the door of opportunities for Nigeria and four winless teams on Wednesday after they dramatically fought back to level 3-3 with Scotland.


In the group, England and Japan were already through to the last 16 before meeting in Nice, where two goals by Ellen White secured a 2-0 victory and first place with a maximum nine points.

Argentina fought back from three down to draw 3-3 in Paris to eliminate the Scots as they climbed to third. But they only have two points and are weakly placed in the battle to finish as one of the four best third-place teams.

To advance, the Argentines need an unlikely pair of draws in Thursday’s final set of group games.

Cameroon and New Zealand who play in Montpellier in Group E can qualify ahead of Nigeria if either win with a good goal margin.

Victory by two goals — or just one in a high-scoring match — would make either Cameroon or New Zealand one of the four best third-placed teams.

“We just need to make sure we win on Thursday and make sure we do everything possible and get to the next round,” Cameroon defender Estelle Johnson said.

Both Cameroon and New Zealand are bottom of their group with zero points and minus three goals.

Scotland looked to be going through as one of the best third-placed sides when Erin Cuthbert’s 69th minute goal put them 3-0 up against Argentina at the Parc des Princes in Paris after earlier strikes from Kim Little and Jen Beattie.

However, Milagros Menendez replied with Argentina’s first goal of the tournament in the 74th minute, and then Bonsegundo’s shot went in off goalkeeper Lee Alexander to set up a grandstand finale.

With two minutes left, after an agonising VAR review, Argentina were awarded a penalty.

Alexander saved Bonsegundo’s tame first attempt, but VAR caught the goalkeeper straying off her line and the Argentine converted her second effort in the fourth minute of stoppage time.

The draw left Scotland on one point, bottom of Group D and eliminated.