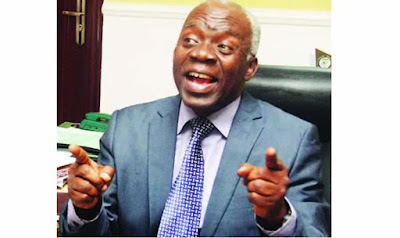 Human rights lawyer Femi Falana (SAN) has condemned the Code of Conduct Bureau (CCB) for its alleged refusal to grant a Freedom of Information (FOI) request by Socio-Economic Rights and Accountability Project (SERAP) on the asset declaration of former Presidents and governors.

The CCB had allegedly turned down the request the ground that an asset declaration form is private information.

Falana described the ground as “illogical”.

The eminent lawyer spoke yesterday in Kano in a keynote address, titled: Involvement of Nigerian People in the Fight Against Corruption, delivered at a stakeholders’ dialogue on corruption in Nigeria organised by ActionAid Nigeria.


Falana said: “The Federal Government has also failed to show commitment to the fight against corruption by encouraging secrecy with respect to asset declaration by public officers. A few days ago, the CCB turned down the request by the Socio-Economic Right And Accountability Project (SERAP) for the release of copies of the declaration forms of former governors and Presidents on the grounds that the declaration forms are private documents.

“With respect, it is illogical to claim that the asset declaration forms submitted by the erstwhile public officers are private documents. Accordingly, the rejection of the request by SERAP is a contravention of Section 1 of the Freedom of Information Act, 2011 and Article 9 of the African Charter on Human and Peoples Rights.

“It is hoped that the CCB will review its position and allow citizens to access the information in the declaration forms submitted to it by all public officers in view of the new policy of the Muhammadu Buhari administration to enforce effective asset declaration by public office holders.”

In his paper, the eminent lawyer said: “It is an undeniable fact that the progressive withdrawal of subsidies from social services by the state, which is a key component of the IMF/World Bank-sponsored Structural Adjustment Programme (SAP), has led to mass poverty in the land.

“It is suggested that N1 billion be set aside for the establishment of a factory in each of the 774 local governments in the country while the balance should be allocated to the police to secure the country.

“Having managed the Petroleum Trust Fund (PTF) under the Sani Abacha junta, President Buhari should have no difficult in investing the recovered loot to address the crises of insecurity and unemployment. After all, $321 million from the Abacha loot is being distributed to the poor, as dictated by Switzerland, which illegally warehoused the loot for almost two decades.”