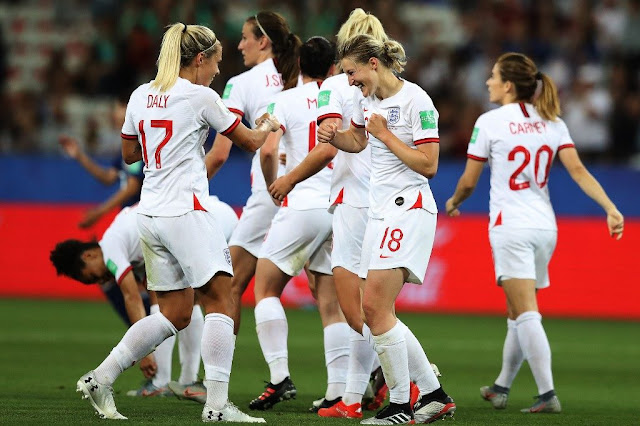 A stunning strike by Lucy Bronze helped England to a 3-0 quarter-final win over Norway in Le Havre on Thursday as Phil Neville’s team eased into the last four of the women’s World Cup.
David Beckham, a former colleague of Neville’s for Manchester United and England, was among the crowd of more than 21,000 at the Stade Oceane to see midfield stalwart Jill Scott open the scoring inside three minutes, becoming just the second English player to score at three separate women’s World Cups.

Ellen White then grabbed her fifth goal of the tournament five minutes prior to half-time and Bronze made sure of the victory with a rising shot high into the net as the hour mark approached.

England were so comfortable towards the end that they could even afford to squander a penalty, with Nikita Parris having her late spot-kick saved.

There were striking similarities between Bronze’s effort here and her goal that gave England a 2-1 win over the same opponents a round earlier at the 2015 World Cup in Canada.

The Lionesses went out of that tournament in the semi-finals and also fell in the last four at Euro 2017. Now they will hope to go a step further, although a daunting challenge awaits against hosts France or holders the United States in Lyon next Tuesday.

Norway had declared ambitions of leaving France with a medal to show for their efforts, but after ousting Australia on penalties in the last round, this was a step too far for them.

It is impossible not to wonder how different things might have been in this game had the class of Ada Hegerberg been available to Martin Sjogren’s team.

They could not recover after falling behind to Scott’s early goal, with Bronze charging forward down the right and cutting the ball back from the byline for the Manchester City midfielder to side-foot in off the far post after White had miskicked.

It was a landmark goal for Scott, who first found the net for her country against Argentina at the 2007 World Cup.

England looked like scoring every time they came forward in the first half, with White hitting the post and Parris having a header saved by Ingrid Hjelmseth before the second goal came on 40 minutes.

Any hopes Norway had of a second-half comeback were doused in the 57th minute when Bronze was fouled by Ingrid Syrstad Engen on another charge forward from right-back.

Substitute Beth Mead laid the ball back to Bronze from the resulting free-kick, and the Lyon star smashed home in style.

Norway had chances to grab a consolation but England stood firm to secure a fourth straight clean sheet, although they missed the chance to score a fourth goal from the spot with seven minutes left.

Captain Steph Houghton was shoved over in the box by Chelsea’s Maria Thorisdottir, but Parris — who had a penalty saved in the group-stage win over Argentina on the same ground — saw her kick from 12 yards kept out by Hjelmseth diving high to her right.