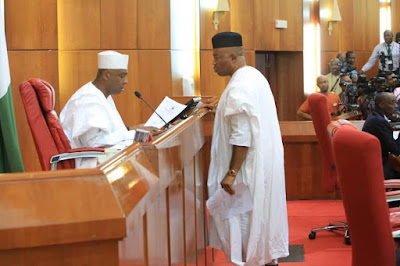 All good things, they say, must end. The Eighth Senate was adjourned Sine Die on Thursday to mark the end of the legislative business of the upper chamber. It was a sobering day for the high and mighty in the Senate chamber with a lengthy valedictory session to cap it all.

It was also a day to say goodbye to the Senate with all its attractions, a day to begin to plot how to face the world outside the confines of the National Assembly complex. For some, it was a day for chest beating and back patting. For others, especially those who suffered defeat in the February 23, senatorial election, they sported the full weight of a lost election like garments.

Although most of the senators laboured to put up the ambiance of camaraderie in the chamber while the session lasted, it was obvious that many were lost in thought of the life after the Senate. Some could not conceal their emotion. Many failed to attend the session apparently for lack of what to say.

The big question is: what’s next for some of the heavyweights in the Eighth Senate who fell by the wayside during the election?

It may be difficult to decipher or decode what the future holds in stock for these movers and shakers of the Eighth Senate. What is certain, however, is that some of them are not finished politically. Some are already licking their wounds, while those in the All Progressives Congress (APC), who lost their deposit to return to the Senate, may be lucky to clinch ministerial and/or board appointments.

As a matter of fact, some of them who are of the Peoples Democratic Party (PDP) extraction may return to the drawing board to plot a comeback. Some will play opposition politics as a means of survival.

SARAKI
For the two- term former governor of Kwara State, the future looks uncertain and the environment looks unfriendly. He lost his state to the APC. It was a humiliating defeat. The state rejected everything he stood for or represented.

For 16 years, he had called the shots in the state. His words were laws, his wishes were commands.  Today, a new order is in place. Those opposed to him over the years are in charge. He is now a political reject. Can he bounce back in the state? It will be interesting to watch Saraki leading the opposition in Kwara.

Going by the fluid nature of Nigerian politics, he may succeed in staging a political comeback in the state. But what becomes of him at the national level? Soon after his defection to the Peoples Democratic Party last year, he was made the National Leader of the party, being the highest political office holder in the party. Will he retain the position now that he holds no political office?

Those who know him say his ambition to rule the country as President still burns high in him. Although some describe the ambition as an uphill task for him, others see him as one politician who knows how to surmount obstacles. Can he mount a strong campaign for President as a non-office holder? Can he match former Vice President Atiku Abubakar, a veteran of presidential contest? Will an Aminu Tambuwal, for instance, queue behind him? Will he still have the clout to pose any serious challenge? The next four years will either make or completely render him irrelevant politically.

DAVID MARK
He declared his retirement from active politics voluntarily. Some say with his wealth of experience, the Benue South former Senate President will always be relevant in the scheme of things in the country. Some describe him as the cat with nine lives.

Mark, who side-stepped the legendary banana peel in the Senate for eight years, is said to have weighed the options and decided to take a deserved bow from the Senate. Others see him differently. They believe he is in his twilight years politically.

On the national plane, he may not be a factor in his party. In Benue where the PDP is in power, his alliance with the governor, Senator Suswan, Dr. Iyorchia Ayu and others secured victory for his party. If the working understanding lasts, his relevance is assured. If it derails, he may be seen and heard but ineffective.

GODSWILL AKPABIO
For Akpabio, who represented Akwa Ibom North West, the coast is not clear. He vowed in his speech during the valedictory session that he would be part of the Ninth Senate. Akpabio is in court to retrieve what he described as his “stolen mandate.” How he is going to do it is yet to be seen.

But it is also said that Akpabio is already negotiating for a ministerial slot. Any way it goes, the “uncommon Senator” may still play a role. His home state is a hostile environment.

GEORGE AKUME
Senator George Akume holds the enviable record as the first elected governor of Benue State to spend two terms in office from 1999 to 2007. He followed that up with a victory in the contest for the senatorial seat of Benue North-West and eventually became the minority leader of the upper chamber.

In the jostle for the seat of the Senate President during the build-up to the Eighth Senate, he was a frontrunner before he stepped down for Ahmad Lawan when it looked like the latter was the candidate favoured by the party’s hierarchy until the Dr. Bukola Saraki pulled the rug off his feet by suborning members of the opposition Peoples Democratic Party (PDP) to emerge the Senate President.

If he had hoped to revive his ambition of becoming Senate President in the Ninth Senate, that too came crashing as he lost his bid for re-election Orker Jev, a former member of the House of Representatives and candidate of the PDP.

But he is in court to challenge his defeat, believing that it is not over until it is over. If he loses his bid to retrieve his mandate, he will hinge his hope on securing a ministerial slot at the centre. Otherwise, he may spend the next four years in the winter.

RABIU KWANKWASO
Senator Rabiu Musa Kwankwaso was the first governor of Kano State in the Fourth Republic, elected on the platform of the People’s Democratic Party. After ruling the state from 1999 to 2003, he lost his re-election bid to Ibrahim Shekarau in the 2003 governorship elections.

But he returned as governor in 2011 for another four-year term that ended in 2015 when he contested the presidential primaries of the APC but lost to President Muhammadu Buhari.

His bid for the presidential ticket of the PDP also fell on its face as he lost it to Alhaji Atiku Abubakar who also lost the election proper to President Muhammadu Buhari. Although Kwankwaso was handed the PDP structure in the state as a way of compensation, his son-in-law who he backed for the governorship seat also lost.

His next line of action remains unclear, particularly as he has since fallen out with his former deputy and incumbent governor of the state, Abdullahi Ganduje. The defeat of the PDP governorship candidate in Kano State, observers say, may force him to retreat to plan a fresh political onslaught in order to remain relevant.

SANI YERIMA
Former Zamfara State governor, Alhaji Sani Yerima, is popular for championing the cause of Sharia by being the first governor to adopt it as the official mode of administration in his state. He held sway as the governor of the state for eight years from 1999 to 2007 before winning election to the Senate.

Having been in the Senate since 2007, he was not a candidate in the last National Assembly elections. But if he had hoped to retire to the state with his party man in the saddle as governor, fate decided otherwise as the Supreme Court declared all the elections won by his party in the state null and void.

With the nullification of APC elections in Zamfara State, new leaders have emerged. How he will get around the troubling situation remains uncertain. How far he can also go in the circumstance is uncertain if his plan was to retire to Zamfara to play godfather politics.

He may, however, be aiming for a ministerial slot from his party at the centre if only to sustain his political relevance in the next four years.

Although he was visible in the APC in Lagos and in the Senate, that was not enough to earn him another term. He lost the party’s primary to four-term member of the Lagos State House of Assembly, Bayo Osinowo.

Observers expect him to remain in APC and remain visible. They also see him venture vigorously into business.

TAYO ALASOADURA
He was in the Senate for just one term representing Ondo Central.

He won election into the Senate on the platform of the APC in 2015 but fell out with Governor Rotimi Akeredolu.

Having lost on both fronts, Abuja and Ondo, his next move remains a matter of conjecture.

MAGNUS ABE
Senator Magnus Abe was one of the governorship aspirants whose dreams collapsed in the just concluded general elections. His bid to secure the governorship ticket could, however, not materialise as he engaged some of the party’s leaders in a running battle.

Convinced that the governorship primary of the party did not follow a due process, he dragged the party to court to challenge the candidacy of Tonye Patrick-Cole who had emerged the governorship candidate of the APC through the party’s direct primaries.

He heaved a sigh of triumph when the Supreme Court ruled the candidacy of Patrick-Cole null and void. All the while, there were allegations in the APC circle that Abe was doing the bidding of Governor Nyesom Wike and other PDP stalwarts in his battles with the leadership of APC.

Even now, there are strong speculations that the Rivers East senator may defect to PDP to actualise his ambition. It is also being speculated that the governorship slot of Rivers State will be zoned to his area in 2013 to pave way for Abe to run.

With his rumoured closeness to Governor Nyesom Wike, Abe may exploit the situation to oil his political campaign for 2023.

JOHN OWAN ENOH
The erstwhile senator from Cross River Central was one of the aspirants who had a shot at the governorship slot of Cross River State.

Although he came from the academia to bestride the dark space of politics, Enoh weathered the storm to emerge the governorship candidate of APC. Unfortunately, he lost the election to the incumbent governor and candidate of the PDP, Ben Anyade.

A lot of people believe that Enoh could return to the ivory tower and use it as a base from where he would make another shot at the governorship seat when the opportunity beckons again.

SHEHU SANI
The senator from Kaduna Central was one of those who were not in good terms with the governors of their states. Between him and Governor Nasir el-Rufai, there has been no love lost, hence his defeat at the poll did not come as a shock to many.

His running battle with el-Rufai is seen by many as his undoing. But Sani is one that many would see as a cat with nine lives.

Having failed to pick the APC ticket, he defected to the Peoples Redemption Party (PRP) from where he hoped to realise his ambition of re-election into the Senate. However, he lost.

His next line of action may be difficult to predict, considering that he came from the background of  an activist and may yet return to his comfort zone. A lot of people believe that activism runs in the vein of the Kaduna Central senator.