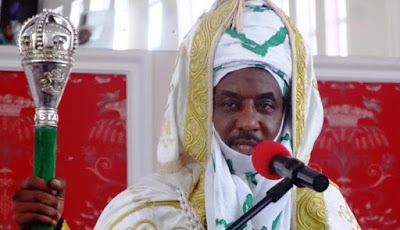 The Emir of Kano, Alhaji Muhammadu Sanusi II, has advocated for the rights of the girl-child to education.

‎The first class traditional ruler made the call while addressing the people of the state, shortly after he led the Eid prayer at the Kofar Mata Central Eid ground in Kano on Tuesday.

‎‎He urged political leaders at all levels to give priority to female education as they did with their male counterparts.

“The people need to prioritise their commitment toward the education of female just like their male counterpart,” he said.

He underscored the need for Nigerians to also continue to pray for peace and progress of the state and the country at large.


The monarch also urged Muslims to fear God in all their activities, reminding them that each and every one of them must give an account of his or her deeds hereafter.

Besides, the Emir called on the people of the state to continue to pray against banditry, kidnapping and other vices.

He admonished Kano people to support each other and work as a team for the overall development of the state.

It was gathered that among those that attended the prayer at the Kofar Mata Central Eid ground were Gov. Abdullahi Ganduje; and his Deputy, Alhaji Nasiru Gawuna; and the Secretary to the State Government, Alhaji Usman Alhaji.

Also in attendance were traditional rulers and members of the Emirate Council.

The security was tight during the prayer as armed policemen and other security personnel were deployed to various Eid grounds and other strategic places across the state to ensure a peaceful celebration.