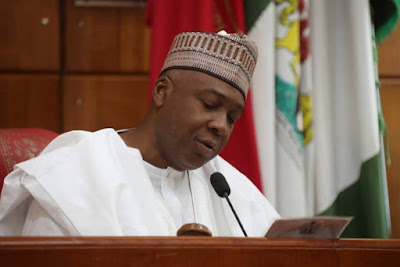 The Economic and Financial Crimes Commission claims former Senate President Bukola Saraki withdrew N12bn in cash from the treasury of the Kwara State Government while he was governor of the state between 2003 and 2011.

The money was then allegedly used by Saraki to offset a N1.36bn bank loan he used in purchasing homes located at 15, 15A, 17, 17A and four flats on Macdonald Road, Ikoyi, Lagos, hence the decision of the commission to seize the properties.

The EFCC said this in a counter-affidavit to Saraki’s originating motion with suit number FHC/ABJ/CS/507/2019.


However, in a counter-affidavit deposed to by Ojilibo Stanley on behalf of the EFCC, the agency said they had established a case of money laundering, criminal breach of trust and conspiracy by the immediate past Senate President.

The EFCC said Saraki had through his companies between 2005 and 2006 taken loans worth N1.36bn from the Guaranty Trust Bank and Intercontinental Bank (now Access Bank).

The commission said in a bid to offset the loan, the ex-governor began to divert N100m from the coffers of the state monthly.

The affidavit stated that on February 28, 2005, the Presidential Implementation Committee on the sale of Federal Government Landed Properties wrote a letter conveying to Saraki the approval of then-Minister of Lands and Housing for the sale of properties at 15 and 17 Macdonald Road, Ikoyi.

The anti-graft agency said on October 11, 2006, another personal loan of N380m was granted to Saraki by GTB to partly finance the acquisition of properties located at 17 and 17A Macdonald Road, Ikoyi.

The commission further claimed that on January 30, 2007, a personal loan of N380m was again granted to the former governor to partly finance the same properties.

It said on April 28, 2009, another personal loan of N400m was obtained by Saraki to develop the same properties.

The affidavit stated, “The personal loans used to acquire the properties were later liquidated with the proceeds of the applicant’s (Saraki’s) criminal breach of trust or misappropriation of funds of the Kwara State Government.

“The applicant (Saraki) procured one Abdul Adama who was his personal member of staff to receive cash from then-Controller of Finance and Account of Government House, Kwara State, Mr Isiaka Kareem, on a monthly basis, the sum of N100m.

“While the applicant was the governor of Kwara State, the total sum of N12bn was withdrawn in cash from the Kwara State Government House’s account domiciled in Zenith Bank.”

The EFCC denied being controlled by the All Progressives Congress, adding that the fresh investigation of Saraki was different from the ones related to the one conducted by the Code of Conduct Bureau.

Saraki had stated in an affidavit he deposed to in support of the origination motion that acting EFCC Chairman, Ibrahim Magu, was on a revenge mission because of the role he (Saraki) played in blocking his confirmation as EFCC chairman.

He said, “Apart from the instigation by my political adversaries, my close contacts have confirmed to me that the 4th respondent (EFCC) renewed its harassment as a way of punishing me for the decision of the Senate not to clear acting chairman of the EFCC, Alhaji Ibrahim Magu, to be appointed as the substantive chairman of the commission.”

Saraki said the EFCC was also pained because he was in charge of the Senate when the legislative arm of government ensured the creation of the Nigerian Financial Intelligence Unit to Magu’s annoyance.

He had also alleged that he was being hounded by the anti-graft body because he emerged as the President of the Senate against the wishes of certain elements in the APC in 2015.

Saraki said the aggrieved elements in the APC were using the EFCC agency to harass him.

He argued that the allegations levelled against him were not new as he had been charged before the CCT and emerged victorious.

He said he was already a successful businessman before becoming governor in 2003 and therefore asked the court to rule that his probe was a breach of his fundamental human rights.