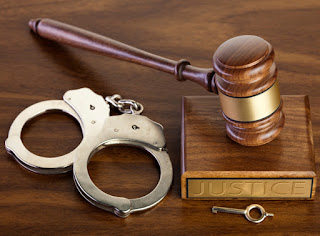 There was a mild drama at Ojo Magistrate Court in Ojo Local Government Area of Lagos State on Friday as a lady slapped a man in court and she was sent to Kirikiri Prisons for contempt of court.

The young lady, Adaeze Eleonu, was the complainant in a phone theft case involving her neighbour, one Chinedu Esemeneh, who was arraigned in court.

However, the case turned full circle as the lady was also remanded for losing her temper and slapping the man even as the court was in session. Both parties, who are not real lovers, were said to have met at a hotel in Ojo area on arrangement by a hotel attendant to have fun.

As they were served drinks, the lady reportedly complained that her phone jammed and asked the man to help her to activate it. Chinedu, while trying to deactivate the phone, excused himself and allegedly disappeared with the phone, a Techno brand worth N45,000.

As the case was being adjourned, the lady, who was furious at the sight of the young man, decided to teach him the lesson by herself and landed a heavy slap on the man’s face. The violent act by the lady attracted the magistrate’s attention, who immediately remanded her in Kirikiri Prisons till the next hearing.