CAN President Ayokunle asked to resign within 7 days 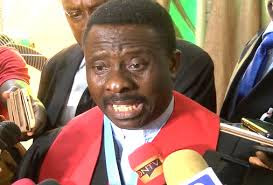 The Concerned Christian Forum of Nigeria, CCFN, has called on the National President of the Christian Association of Nigeria, CAN, Pastor Samson Ayokunle, to resign his position within seven days.

In a press conference on Tuesday, convener of the coalition, Rev. Prince Thompson, said the President of CAN had become a tool in the hands of politicians.

The group said the current CAN leadership has made recent days traumatic for Christians in Nigeria.

According to the coalition, the faith of Christian faithful has never been so bashed in the history of the country as it has been in that space of time courtesy of the leadership of the body.


It, therefore, issued Reverend Ayokunle-led executive seven days to hand over the affairs of the association to an interim committee to run its affairs pending when a new election will be conducted.

According to him, “It is tragic to point out that the desecration of our faith by CAN did not just begin in these recent days. It has been on for a while now.

“The politicisation of Christianity began under the previous leadership of Pastor Ayo Oritsejafor, who sadly became the official spokesperson for the People’s Democratic Party, PDP, and former President Goodluck Jonathan.

“Things got so ugly that the President of CAN became an errand boy. Note, not just any errand boy but one that was being sent to buy weapons and launder money.

“CAN’s leadership under the current President, Reverend Supo Ayokunle, was highly anticipated to be reformists enough to return the association to its lost glory, for it to carry out a practically cleansing of CAN to free it of the dirt clinging to it from wallowing in the mire with swine.

“Our hope in Reverend Ayokunle being able to deliver CAN from the shackles of materialism have been dashed. Beyond having our hopes dashed we are being made despondent because his under his leadership ‘the high places were not taken away’ but they were rather made higher. Truth is being sacrificed on individual private altars built to glorify self.

“On top of whatever we, at that time, accused the Pastor Oritsejafor leadership of, Reverend Ayokunle’s tenure has visited the affliction on Christendom a thousand folds.

“Not only did he continue to desecrate the divine mandate of the association by deploying it as an arm of the PDP he has added the evil of hatred by actively promoting Islamophobia.

“CAN overnight became a vehicle for teaching believers to hate other humans that made after the likeness of God image simply on account of their present religious subscription.

“Even when we differ from Muslims in terms of creeds, the solution is not to promote hatred that can lead to crisis that would lead to the shedding of innocent blood on both sides.

“What the spirit led us to know is that we have a burden of evangelism to convert those that are touched to believe in salvation through Christ Our Lord.

“We will not convert them by launching a vitriol against them, we will not make them appreciate the love of God by becoming abusive and criminalizing their existence.

“Interestingly, we will not convert them by merely talking about the gospel of salvation. Our ability to make converts of those that are yet to know Christ is by portraying Christlike actions that will be more convincing than hours of empty talk.

“A situation where President of CAN has become a tool in the hands of politicians and champion for ethnic-sectarian bigots in the country is a border that should never have been crossed but that is precisely where Christianity in Nigeria is now camped.

“The situation is so bad that there are so many allegations about the Reverend and his associates have been collecting money from politicians and keeping same for personal gains in exchange to speaking according to scripts given to them by these politicians.

“There is no doubt that by all standard he has failed in his responsibility as a father to all and has allowed selfish agenda to rob him of being a channel for the flow of God’s words.

“This is why CAN as currently led is incapable of evangelizing through actions. The leadership cannot even lead believers by examples because their compromises are well known to the faithful.

“To the extent that the first and most important thing in Christendom is to propagate the Gospel of Christ, we categorially declare that the leadership of CAN has lost that vision.

“It cannot even convince Christians to follow the direction it is laying out how then can it be a vehicle for winning more souls for the Lord and protecting the interest and welfare of members, the same members it is even polarising along political divide.

“We have come to the realization that the violence to the body of Christ cannot be allowed to continue for longer lest there will be more atheist and agnostics than Christians by the time Reverend Ayokunle’s leadership of CAN completes its tenure.

“The Concerned Christian Forum of Nigeria therefore demands the immediate resignation of Reverend Supo Ayokunle as CAN President.

“Our demand entails that the entire CAN Executive resigns with the President to allow the association replace them with a leadership that will chart a course that conforms with the ideology upon which CAN was founded.

“If the rejected CAN executive is at a loss as to why it has to go, it only needs to look to the existence of our forum. Had CAN pursued the agenda of uniting Christians across the various sects, denominations and persuasions, we would not have need to form this group pressure the leaders into the doing the needful.

“We give the Reverend Ayokunle executive seven days from today hand over the affairs of the association to an interim committee to run its affairs pending when a new election will be conducted.”