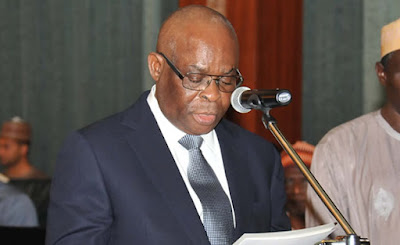 The National Judicial Council (NJC) recommended the compulsory retirement of former Chief Justice of Nigeria (CJN) Walter Onnoghen before he resigned in controversial circumstances, it was learnt yesterday.

NJC made the recommendation to President Muhammadu Buhari after its conclusion of investigation of the petition the Economic and Financial Crimes Commission (EFCC) filed against the former CJN.

The NJC, after investigating allegations of “financial impropriety and infidelity to the constitution” raised against Justice Onnoghen in the EFCC’s petition, recommended his compulsory retirement from office.

Justice Onnoghen’s retirement letter sent to President Buhari on April 4 was written after the NJC  recommended his compulsory retirement.


President Muhammadu Buhari and the Office of the Attorney-General of the Federation (OAGF) made the revelation in documents they filed in response to a suit challenging the appointment of Justice Ibrahim Muhammad as the acting CJN.

The NJC had, after concluding its investigation of the petitions against Onnoghen and Muhammad, kept sealed lips on its findings, but announced that it has sent its recommendations to the President.

President Buhari and the AGF faulted the suit filed by the board of Incorporated Trustees of Malcom Omirhobo Foundation and insisted that Justice Muhammad was appointed in accordance with the law and to prevent a vacuum after the Code of Conduct Tribunal (CCT) ordered his (Onnoghen’s) suspension pending the conclusion of his trial.

They argued that the suit hads become an academic exercise, following Justice Onnoghen’s retirement and conviction by the Code of Conduct Tribunal (CCT), Also, he is barred from holding public office for 10 years, they said.

President Buhari and the OAGF argued that the suit, which also challenged Onnoghen’s suspension, should be dismissed, having been overtaken by events.

They noted that the Court of Appeal has since dismissed the interlocutory appeals filed by Onnoghen, in which he challenged his suspension, the ex-parte order on which President Buhari acted to suspend him, among other interlocutory decisions of the CCT.

President Buhari and the OAGF argued that it was within the President’s power to recommend the most senior Justice of the Supreme Court in acting capacity where the occupant of the office is unable to act.

They contended that the choice of Muhammad as the acting CJN was in order because not only was he cleared of any wrong doing by the NJC, the occupant of the office was unable to act in view of the CCT’s order suspending him.

The plaintiff is querying the proprety of Onnoghen’s suspension and Muhammad’s appointment.

It urged the court to, among others, restrain the President from appointing Justice Muhammadu as a substantive CJN, on the ground that he made himself available to be sworn in when Onnoghen was unlawfully suspended.

The plaintiff also pleaded with the court to restrain the NJC from recommending Muhammad for appointment as the CJN and for the Senate not to confirm him in substantive capacity.

President Buhari and the OAGF stated in one of the court documents that “the 3rd defendant (Onnoghen)  was sworn in by the 5th defendant (Buhari)  on 25/01/2019 as a result of the office of the Chief Justice of Nigeria being vacant.

“The 3rd defendant was sworn in by the 5th defendant based on the fact that the retired Chief Justice Nigeria was unable to perform the functions of the office of the Chief Justice of Nigeria by virtue of the ex-parte suspension order of the Code of Conduct Tribunal dated 25/01/2019.

“Contrary to the erroneous impression at paragraph 21 of the plaintiff’s affidavit, the Court of Appeal has dismissed the four interlocutory appeals filed by the retired Chief Justice of Nigeria in relation to his trial before the Code of Conduct Tribunal.

“The action of the 5th defendant in swearing in the 3rd defendant was only in deference to the valid and subsisting order of the Code of Conduct Tribunal.

“The 5th defendant has the power to appoint the most senior Justice of the Supreme Court Acting Chief Justice of Nigeria.”

They argued that Onnoghen was not removed from office, but merely suspended based on the ex-parte order by the CCT

“To further buttress our contention that it was not a removal, but a suspension, three developments stand to support our position.

“First, after the suspension, the National Judicial Council sequel to a petition by the Economic and Financial Crimes Commission which they found to be meritorious, recommended compulsory retirement of Justice Onnoghen on the 5th of April, 2019.

“Secondly, Justice Onnoghen himself tendered his resignation from service on the 4th of April, 2019.

“Thirdly, the Code of Conduct Tribunal eventually ordered his removal from office and cessation to hold public office for ten years.

“All the three developments referred to above could not have happened if Justice Onnoghen had been removed and his seat declared vacant by the 4th and 5th defendants on the 25th day of January, 2019.”

On the fate of the appeals filed against the interlocutory decisions of the CCT, they noted that “the Court of Appeal, upon hearing the appeal by justice Onnoghen on his suspension was dismissed by the court.”

They argued that the 5th defendant (Buhari) is vested with the power to appoint a person into the office of the Chief Justice of Nigeria, by the provisions of section 231(1) of the Constitution of the Federal Republic of Nigeria (as amended).

They said: “We submit further that it is trite that a body with appointing power also has the power to suspend as established in section 11(1)(b) of the Interpretation Act.

“It can be inferred that, by reason of the suspension of Honourable Justice Onnoghen, he was unable to perform the duties of the office of the Chief Justice of Nigeria.

“Hence, the President was right to have appointed the most senior Justice of the Supreme Court to perform the function of the Chief Justice of Nigeria (in acting capacity), pending the hearing and determination of the charges filed against him.”

President Buhari, the OAGF also filed a notice of objection in which the urged the court to decline jurisdiction over the case on the grounds that the plaintiff lacked the requisite locus standi (right to initiate the suit).

They also argued that the suit was an abuse of court’s process on the grounds that the plaintiff had filed a similar suit before now.

Justice Inyang Ekwo adjourned till Friday for hearing of the both the substantive suit and notices of preliminary objection filed by defendants.

Listed as defendants in the suit are: the NJC, the Federal Judicial Service Commission (FJSC), Justice Muhammad, the Federal Government, President Buhari, the AGF and the Senate.