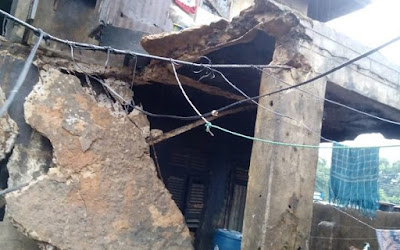 A 3 storey building under construction has collapsed around Fagba in Iju area of Lagos, leaving 12 injured.

It was gathered that the building caved in around 12 midnight and left many people trapped in the rubble.

Osanyintolu added that no life was lost in the incident though the evacuation was ongoing. He added that those injured had been evacuated and treated while some were taken to the hospital for further treatment.


He said: “This is just to inform you that a 3 story building collapsed at K Farm Fagba Off Iju road. It was a building under construction. The people there have been evacuated and the injured are responding to treatment.

“No mortalities recorded. All the Key Stakeholders that are important in managing Disaster in Lagos are on the ground. However, the building will be pulled to ground zero for safety of the people living in the area .”

He insisted that no life was lost in the tragic incident, adding that the 12 people rescued were being taken care of.

Osanyintolu, however, said that all the buildings near the collapsed building would be subjected to the structural integrity test to ascertain their strength.

“All the buildings adjacent/ beside the collapsed building will be subjected to solid material testing. For your information,” he said.