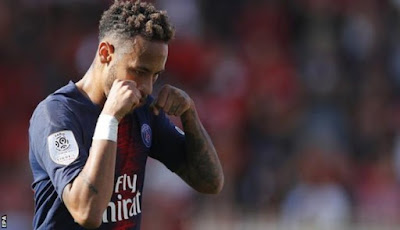 Paris Saint-Germain forward Neymar has denied he raped a woman he met on Instagram and insisted he is the victim of attempted blackmail.

It was gathered that they have seen a document filed in Sao Paulo alleging the footballer drunkenly assaulted his accuser at a hotel in Paris, where he plays for Paris Saint-Germain.

The former Barcelona player, who signed for PSG for a world record £198m, is alleged to have met the woman after they exchanged messages on the social media site.

His assistant is said to have sent the woman plane tickets on 15 May and the pair checked in to a hotel.

According to the claims in the police report, after Neymar and the woman “caressed” the footballer became “aggressive”, then used “violence” and “practised sexual intercourse against the will of the victim”.

The player posted a seven-minute video on Instagram on Sunday in which he denied the accusation and insisted it was “a set-up”.

“Anyone who knows me, knows of my behaviour, knows that I would never do something like that,” he said.

The video included intimate images and WhatsApp messages he says he exchanged with the accuser in a friendly way days later.

“There was a relationship between a man and a woman between four walls,” he said, adding that “the next day nothing happened”.

“I hope investigators read the messages and see what happened,” said the striker.