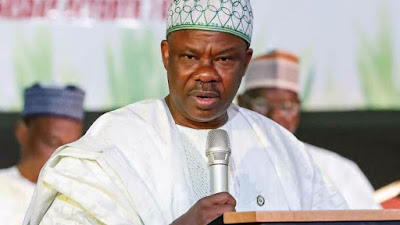 Former President Goodluck Jonathan on Thursday said he did not grant any approval for the construction of an armoury to former Ogun State Governor, Ibikunle Amosun, or any governor during his presidential term between 2010 and 2015.

“I am not aware of any approval (to build an armoury to stockpile weapons),” Mr Jonathan said through a close associate, who was a minister in his administration.

He advised this newspaper to further confirm from former National Security Adviser, Sambo Dasuki, that no such approval was granted.

Mr Dasuki has in the past four years been in the custody of the State Security Service (SSS) and this newspaper was unable to directly contact him. But a former director at the office of the National Security Adviser, who worked closely with Mr Dasuki during Mr Jonathan’s era, said no such approval was given during Mr Dasuki’s tenure.


“Oga (NSA Dasuki) did not grant anyone approval to build an armoury,” the former official said. He asked not to be named so as not to be victimised by the current administration.

“Maintaining an armoury in Government House is an illegal activity, and we did not approve any such request during our time. We did not permit any governor to store arms and ammunition.

“If he is insisting there was an approval granted him for his armoury, we challenge him to make the documentation public.”

Mr Jonathan was Nigeria’s president at a time of heightened insecurity, during which the Boko Haram sect became a full-blown danger to Nigeria’s corporate existence.

The Jonathan administration was preoccupied with containing Boko Haram and other manifestations of insecurity under his tenure, and Mr Amosun, as an opposition politician, would have raised a red flag if he sought to purchase weapons and stockpile them at his official residence.

While struggling to extricate himself from the story about how he stockpiled sophisticated arms and ammunition at Ogun State Government House, Abeokuta — in a blatant violation of Nigeria’s Firearms Act — Mr Amosun had claimed that he received permission from Mr Jonathan to import weapons and stockpile them for security purposes.

It was reported on Monday night that Mr Amosun stored arms and ammunition for a long period at hisofficial residence when he was governor. The politician, now a senator, called the police commissioner, Bashir Makama, and hurriedly handed over the weapons to him a day before he left office on May 28.

National security officials found Mr Amosun’s action particularly troubling and illegal, expressing further dismay that the country’s security architecture failed to detect such a massive cache of arms and ammunition for such a long time.

In his defence Tuesday night, MrAmosun denied keeping the AK47 in his residence, but admitted he had theammunition and armoured personnel carrier in his possession until his last dayin office and seven years after he supposedly procured them for the police.

He said he stored the weapons in a “designated armoury” at the Government House.

Still, the Firearms Act and other extant firearms regulations absolutely prohibit possession of the type of bullets and armoured personnel carrier — all categorised as controlled equipment — that Mr Amosun admitted handing over to Mr Makama on his last day in office.

The law grants the president exclusive powers to authorise establishment of armouries, and now Mr Jonathan, who was the president at the time, had said there was no such approval for Mr Amosun or any state governor throughout his tenure.

Outraged Nigerians immediately called on security agencies to swoop on Mr Amosun and ensure he was thoroughly prosecuted, but security chiefs have been reluctant to take action.