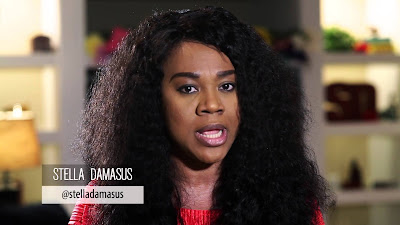 America based Nollywood actress, Stella Damasus has expressed her views on the rate of scam in America. Stella who recently featured in her hubby’s film took to her twitter page to express her disappointment.

According to her:” People think Nigeria is filled with scammers right? They have not experienced America. I get more than eight scam calls daily in this country and their methods are high tech.Pls be careful with who you give info to”.

Damasus recently joined the conversation about whether American urban fantasy police procedural comedy-drama television series, Lucifer is good for Christians or not.

The series that was developed by Tom Kapinos and premiered on Fox on January 25, 2016, has been the subject of controversy ever since its first episode aired.


Recently, Joshua Bamiloye, the son Christian film producer, Mike Bamiloye criticised the series on Twitter. In his post, he shared.

“There’s a show called LUCIFER. As in the devil o lol. And you, knowing how captivating foreign series can be. You still watch. Now you LOVE the character; Lucifer, like Jack Bauer. And somehow you think, the devil isn’t winning your soul over…” He added.

“That being said, this isn’t to scare us but to remind us to stay vigilant, wise, keeping our hearts and spirit on what glorify God. We are more than conquerors in Christ Jesus.”

Re-emphasizing his thoughts in her own post, Damasus disclosed that she has banned her kids from watching the series as well as explaining to them why they shouldn’t. According to her,  the information she passed to her children about the film was also passed to their friends. She tweeted,

I had a conversation about this in my house weeks ago. Had to tell kids why they couldn’t watch it in my house or anywhere else. They understood and told their friends too. A clever and subtle way of getting one to get used to him and even admire. I no gree o…”