Akpeyi must stop dribbling as a goalkeeper - Rohr 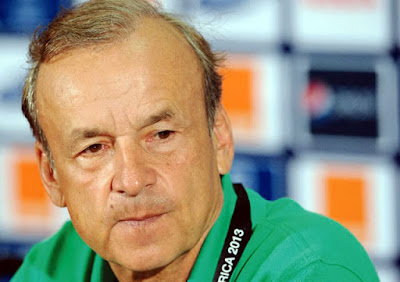 The keeper almost fumbled Kenneth Omeruo’s simple back pass in Nigeria’s 1-0 win over Burundi in their opening 2019 Africa Cup of Nations Group B game on Saturday, while trying to dribble an opponent.

The 32-year-old, who was picked to start ahead of Francis Uzoho, made outstanding saves in the win but was obviously jittery all through the encounter.


“The goalkeeper did not concede a goal, which is good for him and for the team. And he stopped a wonderful opportunity in the first half and as you know, the first goal is the most important, so in that situation, he was really very good,” Rohr said during his post-match interview.

“Then we know that sometimes there can also be mistakes. What happened when he tried to dribble with the ball, I don’t like that. He did it, but we will try to make it better next time. But what I saw from him in the last three weeks was really so good in the training sessions that today (Saturday) he was our number one.”