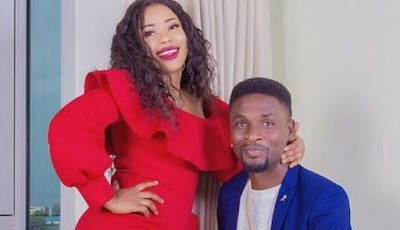 Nollywood actor, Adeniyi Johnson on Monday shared a video of himself surprising his wife, Seyi Edun on her birthday.

Seyi who is also an actress was in tears as a saxophonist hired by her hubby serenaded her with a soothing birthday song and cake delivered to her.

In 2018, Seyi Edun shut down break up rumours as she released a photo of Adeniyi Johnson and herself.

The Yoruba Nollywood actress took to her Instagram page on Thursday, November 6, 2018, where she posted a very cute of Adeniyi Johnson and herself. She went to caption the quote;
“God gat u AyanfeOluwa #Oluwaloseyi #iseoluwanii #koto19reloaded,” she wrote.


A few hours after posting the cryptic message, Adeniyi Johnson called out his former wife, Toyin Abraham for refusing to sign their divorce papers.