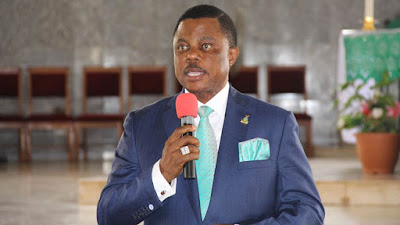 This was as he commended Buhari for honoring the presumed winner of the June 12, 1993, presidential vote, Chief Moshood Abiola, with the renaming of the National Stadium in Abuja, after Abiola.

This was contained in a statement released Saturday in Awka, the Anambra State capital, by C. Don Adinuba, the state Commissioner for Information and Public Enlightenment.

Obiano said the renaming of the stadium was “the icing on the cake in the steps taken so far to immortalize a national figure who won the 1993 presidential vote fair and square but was denied victory and, more painfully, incarcerated solitarily.

“We have watched with admiration how President Buhari first announced in the first week of June, 2018, his intention to make June 12 a national holiday and bestowed on Chief Abiola Grand Commander of the Federal Republic, Nigeria’s highest national honour given to only heads of state.

“President Buhari followed it up with an appropriate bill in the National Assembly and then assented to it on passage, thus changing Nigeria’s Democracy Day from May 29, in commemoration of the day the military handover the Nigerian national leadership to elected civilians on May 29, 1999, to June 12, in remembrance of the day the historic election between Chief MKO Abiola of the Social Democratic Party and Alhaji Bashir Tofa of the National Republican Convention was held.

“No one expected the National Stadium to be named after the hero of the struggle for democracy. The renaming must have been the president’s personal idea and initiative.

“By the time Chief Abiola joined the presidential contest, there was no person who could rival his support for sport development in the African region, which earned him the honour of Pillar of Sports in Africa from the Association of African Sports Confederations.

“For example, he provided tremendous financial resources to his Abiola Babes Football Club based in Abeokuta, Ogun State, which enabled most of the players to escape from abject poverty to lead a comfortable lifestyle. The players understandably became more dedicated.

“Abiola Babes scored the bull’s eye by winning within a few years of its formation the prestigious National Football Club League Championship.

“Unknown to most Nigerians, Chief Abiola was a boxer, and was guided and assisted by an indigene of Nnewi, Anambra State, named Dr George Akabogu, who was to become a famous school principal and later an academic.

“Chief Abiola was a true Nigerian. He donated generously to worthy causes and championed quite a number selflessly.

“Apart from employing Nigerians generously in his organizations regardless of their faith, gender or ethnic origin, Chief Abiola established Udoka, an Igbo newspaper;Amana, a Hausa newspaper; and Isokan, a Yoruba newspaper.

“Abiola never left anyone in doubt that he was greatly inspired by the nationalism, patriotism and sportsman-like spirit of Nigeria’s first president, Dr Nnamdi Azikiwe, GCFR, PC. He remained an avowed Zikist up to his death.

“On the occasion of the first anniversary of June 12 as Democracy Day in honour of a great Nigerian patriot, it has become imperative to remind President Buhari of the request I made to him on behalf of the government and people of Anambra State when he visited Onitsha to commission the newly completed Zik Mausoleum last January 24 that he declare Zik’s birthday a national holiday.

“The Great Zik of Africa was not just Nigeria’s first president or the man who led Nigeria to independence in 1960. He was Nigeria’s first indigenous Governor General and the first Senate President.

“A Nigerian nationalist of incomparable status and a man of letters through and through, the Great Zik of Africa had established as early as the 1950s newspapers in Ibadan, Zaria, Kano, Onitsha, Port Harcourt and, of course, Lagos to fight for Nigeria’s liberation from oppressive colonial rule.

“It has, therefore, become a national scandal that a national holiday has yet to be declared in honour of this great African son. The people and government of Anambra State once again call upon President Buhari to end this national blight by declaring November 16 of every year a national holiday in commemoration of Dr Azikiwe’s birthday.”