‘We’ve never had it so good in Lagos’ — after Church of Nigeria, MURIC hails Ambode 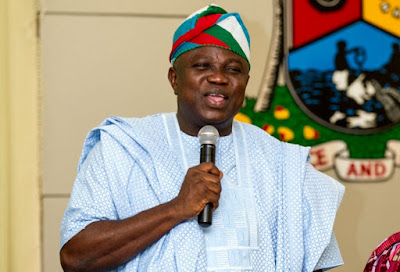 Speaking while presenting a letter of appreciation to the governor during a Ramadan Tafsir/Iftar and special prayer organised by the state government, Ishaq Akintola, director of MURIC, described Ambode as a top performer whose achievements are indelible.

Akintola said aside the massive infrastructural drive, the governor also prioritized welfare of Muslims and worked hard to enhance peaceful co-existence and harmonious relationship among religious groups in the state.

He noted that the state had never enjoyed governance as good as Ambode’s administration, adding that his name was already written in gold in the history of the state and can never be altered by anybody.


“Quran Chapter 14 verse 7 says if you show appreciation, we would give you even much more. This is what we have come to do to you today sir, ” Akintola was quoted to have said.

“We have never had it so good in Lagos, we want to appreciate you; you are a performer and numero uno. We have seen action in Lagos state.

“You are a jewel of inestimable value. Is it the infrastructure that you have developed in Lagos state? Is it the gentlemanly attitude that we all have seen in you?

“Other states are burning as we speak but Mr Akinwunmi Ambode, the Executive Governor of Lagos state, took the political landscape with astounding equanimity. When there should have been storm, you calm everything down.

“Mr Akinwunmi Ambode, your name is already written in letters of gold in the annals of Lagos history; it is indelible and nobody can ever erase it again.”

He also commended Ambode prompt payment of workers salary and for setting up the Nigeria Inter-Religious Council (NIREC) in the state.

“Salaries are owed for eight months, nine months, eleven months in several states of the federation in spite of all the financial facilities they got from the federal government; Lagos has not owed one month not even one week.

“Salaries are paid, workers are happy, there is industrial peace in Governor Ambode’s time. We appreciate the Governor and this will go down well in history.

“Of particular note is Muslims and Christians sitting together through the committee (NIREC) that the governor set up which has greatly enhanced peaceful co-existence.”

The church of Nigeria had also tipped Ambode for a federal appointment after presenting him an award for ‘monumental achievements’ in the state.