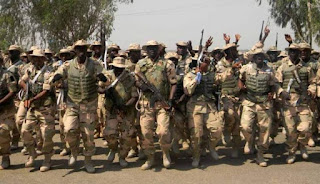 Similarly, Army Spokesperson, Col. Sagir Musa said in a statement that troops have also arrested a local weapons fabricator, Salisu Ibrahim during a raid on the suspected facility at Kontagora in Kontagora Local Government Area of Niger.

According to him, two pipeline vandals and illegal oil bunkerers were intercepted along Sapele-Warri road in Sapele Local Government Area of Delta and their vehicles destroyed.