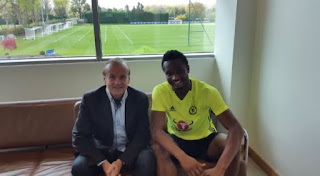 Super Eagles Head Coach, Gernot Rohr will meet Captain Mikel John Obi in London next week before a final decision is made on his selection for next month’s Africa Cup of Nations, AOIFootball.com can exclusively report.

Despite not featuring in any of the Eagles’ qualification matches prior to the tournament, Rohr maintains that Mikel remains a vital part of his team and will wait for him to make a final decision on his international career.

Rohr’s visit to the Middlesbrough midfielder will quash speculations of a rift between the pair with Mikel also stating in the past that he remains committed to the national team.

Mikel, 32, is one of only three Eagles players to have won the AFCON and with 86 senior caps under his belt, the former Chelsea midfielder will be a plus to the team as they get set to view for honours in Egypt.