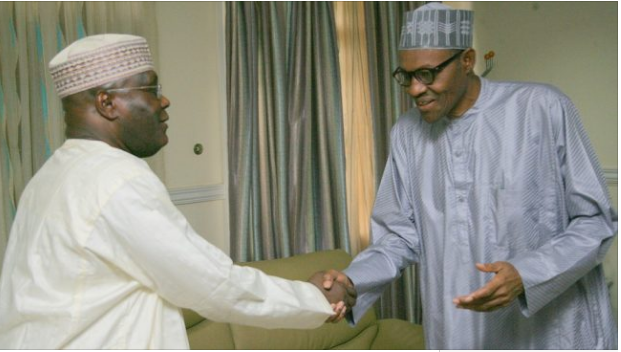 Atiku Abubakar, presidential candidate of the Peoples Democratic Party (PDP), has asked President Muhammadu Buhari to take responsibility for the insecurity across the country.

Reacting to a report by a “US based Centre for Diplomacy and Democracy” accusing him of having a hand in the killings, Atiku said there is no such centre in the US, describing it as a fabrication of the ruling All Progressives Congress (APC).

He asked Buhari to rise up to the task and stop blaming the opposition.

“No such body called Centre for Diplomacy and Democracy exists,” he said in a statement Paul Ibe, his media adviser, issued on his behalf on Thursday.


“Americans will never write ‘Centre’. They will write ‘Center’ in conformity to American English usage.

“This is the deepest low that Muhammadu Buhari administration has gone in causing further division and promoting instability in Nigeria.

“Anyone versed enough in the protocol of international NGOs will discern without much ado that the particular report by a faceless, insipid organisation known as ‘Centre for Diplomacy and Democracy’ was contrived with express mobilisation from officials of the Buhari administration in a shameless and disingenuous attempt to find a jejune explanation for the rising rate of insecurity in Nigeria.

“It is so distasteful that the Buhari administration, rather than have a self-introspection and admit to the world that its policies and actions are responsible for the divisions in the country with the manifestation of all manner of crimes such as banditry, kidnapping and wanton killings across the land chooses to employ the service of a faceless NGO to blame the opposition for its own ineptitude.”

Tackling the president over his comment that Mohammed Adamu, the inspector-general of police (IGP), had lost weight due to his hard work, Atiku said the Buhari administration and the APC are renowned for propaganda stunt and double-speak.

“In their warped thinking, the performance rate of security chiefs during times like this is determined on how much weight the Inspector General of Police has lost,” he said.

“The question to ask is: how would the APC have reproved a president who makes such careless remarks on national security at a time when insecurity in the country has assumed epidemic proportions?

“President Buhari and the APC have shown without equivocation that the job at hand is overwhelming for them. And because they lack the basic clue of how to tame the bogey that they have created, they now scamper around like school kids who have caused an upset in a highly sensitive science laboratory.”

He added that all Nigerians want is a president who can hold the bull at the horn and get the job done because the president took an oath to defend the lives and property of the citizens, which is the primary responsibility of every government.