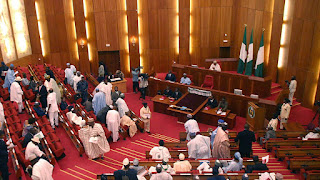 Indications emerged that most Senators-elect may push for the adoption of Standing Rules 2011 for the election of new principal officers next month.

The development may lead to the use of the open ballot system for the election of new officers.

The senators-elect said since Senate Standing Orders 2015 was allegedly forged, there is no basis to use it.

Besides, the police report on the investigation into the alleged forgery of the Senate Standing Rules 2015 is still pending.

It was learnt that the report was kept in the cooler because of the search for “a political solution” to the crisis.

But the Clerk of the National Assembly, Mallam Mohammed Sani-Omolori has distributed a copy of the controversial Senate Standing Orders 2015 to senators-elect. Most of them have been meeting on the need to reject the Senate Standing Rules 2015.

It was gathered that in one of the meetings, the legal advice presented to the session indicated that only Standing Rules 2011 could be regarded as valid.

A ranking senator said: “The Standing Rules 2015 was an illegal document because all the procedures for amending the 2011 rules were not followed. The document was foisted on senators; there was no anywhere we sat to alter the rules book.

“The Standing Rules was forged to pave the way for the election of principal officers by secret ballot.

“You will recall that the forgery of the 2015 rules is still the subject of an investigation by the police. The report of AIG Ali Amodu’s Investigative Committee is yet to be considered by the government because some public officers were indicted.

Another second term Senator said: “Although the Clerk to the National Assembly, Omolori, has distributed the 2015 Standing Rules to senators-elect, we are not bound by it because it is an illegal document.

“We have been meeting with our colleagues on the need to adopt the 2011 Standing Rules. We hope that we will be able to build consensus on this.”

A senator-elect said: “We prefer to adopt 2011 Standing Rules for the election of our principal officers instead of the controversial 2015 Standing Orders.

“If you look at the antecedents of 2015 Rules, it will create more division for the Ninth Senate. We do not want to start on a controversial note.”

As at press time, it was learnt that the report of the Police investigation into the alleged forgery of the Senate Standing Rules 2015 was still pending.

The probe was effected by a Special Investigation Panel (SIP), which was headed by AIG Ali Amodu (Rtd).

The panel was mandated to find out the following:

“Obtain the complete Hansard of the 9th and 24th June, 2015 to see what transpired on the floor of the Senate.”

A police source said: “The SIP has submitted a comprehensive reporting the last three and a half years but the government is yet to act on it.

“Definitely, a forgery was established. Also, some members of the National Assembly and top bureaucrats were indicted but action was suspended because of alleged ‘political solution’ to the aftereffects of the investigation.

“If we are invited at any time, we will make the SIP report available.”