Senate Presidency: Buhari won’t ask me to step down — Ndume 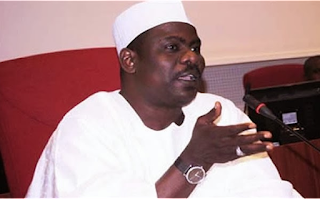 One of the contenders for the Senate president’s seat, Mohammed Ali Ndume, has said that he believes President Muhammadu Buhari will not ask him to step down for anybody in the contest.

Ndume said the president believed in democratic process and would not interfere in the process of electing leaders of the National Assembly.

Speaking yesterday during an interaction with the newsmen in Abuja, Ndume also said he would not want any of the contenders for the seat to step down for him. “We’re a house of elders, and I don’t expect anybody to choose a leader for elders, they should be allowed to do that by themselves,” he said.

According to him, “I don’t think Mr President will ask me to step down because he has never interfered in the electoral process. Besides, there’s no need for me to step down. “Let’s go into election and allow the senators to elect whom they want. I’m against imposition.

The president wasn’t imposed, and the party chairman too wasn’t imposed. I don’t think anybody will approach me to step down. “When Mr President contested the first time, he had the likes of Kwankwaso, Okorocha, Sam Nda-Isaiah and the rest. Okorocha contested despite the fact that the position was zoned to the North.

“The truth is that I don’t want anybody to be asked to step down for me. Even during the primaries, the party wanted to screen out some of my contenders, and I said no.

We relate like brothers that we’ve been. I believe all the senators have something to offer.” He said one of the reasons they lobbied for the position of the Senate president to be zoned to the North East was as a result of the damage done to the zone by insurgency.

“I have seen the devastation, I’m a victim. The whole of Borno is living like a modern prison. The office of the Senate president can be used to have global support. It’s not as if you’ll deep your hand into money, no.”

Asked if his party, the APC, erred in endorsing Lawan as its preferred candidate for the seat, Ndume said: “The party hasn’t taken a decision technically. So, I can’t say the party erred. “The party technically hasn’t decided that its Ahmad Lawan. Oshiomhole is the chairman of the party and not the party.

The president didn’t say he aligned with the recommendation of Lawan. He only said the party did the most difficult thing. “Oshiomhole erred by narrowing down on a particular person.

That’s his personal opinion, and that won’t affect my chances. “I wrote to the party indicating my interest.

“I’m talking to all my colleagues, those that can listen to me. You may talk to somebody and then what he says in his mouth may not be what’s in his mind.

I’m talking to both APC and PDP senators-elect. ‎I’m a son of nobody who became somebody without knowing anybody,” Ndume said.