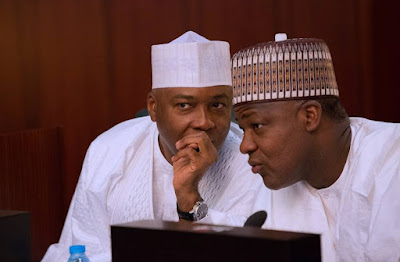 The presidency has said it is confident that the events of June 9, 2015 which produced Bukola Saraki as Senate President and Yakubu Dogara as Speaker of the House of Representatives will not repeat itself in the election of the leadership of the 9th National Assembly.

Ita Enang, Senior Special Adviser on National Assembly Matters (Senate), said the ruling All Progressives Congress (APC) is on top of the situation, adding that the wishes of the party will eventually prevail.

In 2015, APC had penciled down Senator Ahmad Lawan, the current Senate Leader, who hails from the North-East for the position of Senate President while Femi Gbajabiamila from the South-West was positioned for the Speaker slot.

However, some APC lawmakers rebelled against the party and in concert with their PDP colleagues elected Bukola Saraki and Yakubu Dogara as Senate President and Speaker, respectively.


For the 9th National Assembly, the APC has settled for the duo of Senator Ahmad Lawan (Yobe North) and Femi Gbajabiamila (Surulere 1) as Senate President and Speaker of the House of Representatives, respectively.

However, the positions are being challenged by some lawmakers who described the party’s position as imposition and an attempt to meddle in the leadership selection process of the National Assembly.

In the Senate, Ali Ndume (Borno South) and Danjuma Goje (Gombe Central) have indicated interest to contest for the exalted position, though Goje is yet to formally declare his ambition despite mounting pressure from his loyalists on him.

In a bid to avoid the events of 2015 where the candidates adopted by the party lost, many had thought President Buhari as the leader of the party will call the gladiators together and speak with them on the need to respect the position of the party. But the president has refused to do that.

Speaking with Daily Independent, Enang said he believes that the coup d’état of 2015 will not repeat itself because it is the majority of the lawmakers who opted for Lawan and Gbajabiamila based on their current rankings and length of years in both chambers of the National Assembly.

“I am sure what happened in 2015 will not repeat itself because the APC is in total control of the situation. We are almost at a consensus position. We are not ignoring anybody or using any harsh words on them. All the elected senators are stakeholders of the party and we are appealing to them to agree with the position of the party.

“The position that majority of them has taken has become the position of the party. The majority of them are saying let us follow legislative convention which is that the highest elected member of the party takes the seat as the presiding officer. As at today, Bukola Saraki is not coming back, Ike Ekweremadu is of the minority party.

“Senator Ahmad Lawan has two things going for him. He is currently the Leader of the Senate. So, he is the next in rank in terms of protocol. Also, in terms of his years of service as a senator, he is the highest amongst all of them. He was elected in 1999 as a member of the House of Representatives where he served till 2007.

“From 2007 till now, he has been in the Senate. So, in terms of length of service and ranking among the senators-elect in the National Assembly, he is the highest.

“The same also applies to Femi Gbajabiamila. He was elected in 2003. From 2003 till now, which is 15 years, he has been in the House of Representives. Again, Dogara has been reelected but he is in the minority party and as such, he is not contesting. The next to Dogara is Yusuf Lasun but he was not reelected. So, the next person in ranking is Gbajabiamila. So, the members have agreed that both Lawan and Gbajabiamila should be the leaders of both chambers. Having agreed, they now presented these persons to us in the party and so, we have to defend it and uphold it. It is the members themselves who settled for these men.

“We are not saying that ‘if you do this, we will do this to you’, no. They have a right having been elected as either representative or as senators of the Federal Republic of Nigeria to be in the National Assembly. We are only working to assuage them to see reasons with us and to build consensus and, as of today, we are conscious that we are going to have a situation of a consensual nomination without opposition”, he said.

Also, speaking with Daily Independent, Prof. Itse Sagay (SAN), Chairman of the Presidential Advisory Committee Against Corruption (PACAC), said it is unfair for some people to claim that President Buhari has not intervened in the leadership selection process.

He said the president did that by having a dinner with the lawmakers-elect where he endorsed Lawan and Gbajabiamila.

On why the president has refused to meet with Ndume, Goje and other lawmakers who are against the party’s position, Sagay described them as rebels, saying the president should ignore them and allow them to be humiliated.

“To say the president has not intervened is false. The president has intervened by endorsing Lawan for Senate and Gbajabiamila as Speaker. He did that publicly and then asked the national chairman, Oshiomhole, to carry the message to everybody. So, he has already intervened.

“The only thing you can say is that since Ndume decided to be indiscipline, he hasn’t called him privately. Frankly, if I were the president, I will not call Ndume or any of the rebellious lawmakers. I will let him crash on hard rock. Let his indiscipline, which is against the interest of the party that produced him, because without APC, Ndume wouldn’t have been a senator today, yet he is carrying on in such a disgusting manner as if his ambition to become Senate President is more than the interest of the whole country”.

“So, let him do it and crash. By calling him, the president is dignifying him and he doesn’t deserve that dignity. He should be left to crash and after that he will be on his own and the shame will follow him for the rest of his political career.

“Anyone who goes against the party’s position is a rebel and they should not be allowed to remain in the party”, he said.