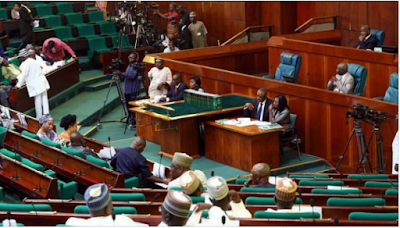 The house of representatives has called on President Muhammadu Buhari to rescind an executive order mopping up guns with private individuals.

The lower legislative chamber made the call on Thursday after adopting a motion seeking to revoke the “executive order to remove, revoke and banish all firearms certificates and licences throughout the federation”.

It said mopping up the guns would expose citizens to dangers and deny them self defense.

Nnenna Ukeje from Abia state, who sponsored the motion, said Buhari recently signed the executive order that is to take effect on June 1, 2019.


We could not immediately confirm the contents of the order as Femi Adesina and Garba Shehu, presidential spokespersons, were not reachable when this report was filed.

According to Ukeje, while there is need for gun control, withdrawing legal guns would mean “only illegal guns will be in circulation and only criminals will own guns.”

“One would have thought that government position will be to domesticate international conventions that have proven around the world to be effective in curbing proliferation small arms and light weapons,” she said.

Most of the lawmakers also agreed with Ukeje’s submission as they argued there should be clear provisions for getting a gun licence rather than retrieving all the ones granted.

“This executive order is to make everybody in Nigeria vulnerable. Are they saying people use them to kidnap or kill? No. It is the kidnappers and armed robbers that are using it without licence,” he said.

Simon Arabo from Kaduna state argued that “you cannot use an executive order to override a lawfully acquired weapon.”

According to him, “if most of the weapons are being used illegally, it is for the security to go and tackle that. Not for people who have theirs legally. I think that executive order if it has been signed, should be overwritten.”

Mojeed Alabi from Osun state, however, supported mopping up the guns on the ground that the police “has no clear criteria for issuing a gun licence” in Nigeria “except you want to give them money.”

“So people take guns without any procedure visible to all of us. If the police do not have a full regulations guiding ownership or acquisition of guns, then I will advise they be withdrawn,” he said.

“The procedure is wrong and because of that, the president is right to say they withdraw it. Let them come up with regulations.”

The lawmakers subsequently voted against the order and urged the president to withdraw it.