Player of the year: Hazard makes history at Chelsea awards 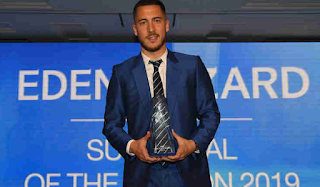 Hazard is the first player to win all three awards in the same year. He has now received the main prize – voted for by Chelsea supporters – for a record fourth time, having also done so in 2014, 2015 and 2017.

“My relationship with the fans has been really good since I came here,” Hazard said after picking up the Player of the Year award from Maurizio Sarri and Gianfranco Zola at the Royal Lancaster hotel in central London.

“It’s always a pleasure to play at Stamford Bridge in front of the fans. That’s why I am on the pitch. When we play for such a great club like Chelsea at the end of the season you want to win something. Now we have that opportunity. We will go to Baku all together with the fans and we will be back with the trophy.”

A joy to watch with his dazzling skill and turn of pace, no player brings the supporters to their feet as often as Hazard. The 28-year-old has mostly been deployed on the left side of the Blues’ attack but has also, on occasion, led the line.

Even by his high standards, it has been a season to remember for Hazard. No Chelsea player has more goals (19) or assists (16) than him, and he also leads the way for successful dribbles, chances created and touches in the opposition box. Across the whole of the Premier League, he has been involved in more goals (16 goals, 15 assists) than anyone else.

The standout moment according to Blues fans was his stunning solo strike against Liverpool at Anfield which was named the Chelsea Goal of the Season earlier on Friday night. He has now won that award three times.

His team-mates too recognised Hazard’s contribution this term by naming the Belgian the Players’ Player of the Year. It is the second time he has received that accolade.

Also at the night, Callum Hudson-Odoi was named Chelsea Young Player of the Year after a thrilling breakthrough season at Stamford Bridge and an international debut at 18 to boot.

Speculations are, however, high about Hazard moving to Real Madrid in the summer. The Belgian has one year left in his current contract and has not renewed it.