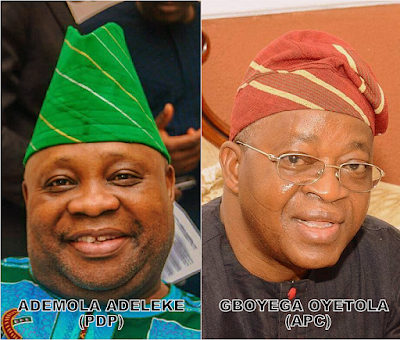 The Abuja Division of the Court of Appeal on Thursday nullified the judgment of Osun State Governorship Election Petitions Tribunal, which upturned Governor Adegboyega Oyetola’s victory at the September 2018 poll.

By a split decision of two-to-one, the Osun three-man tribunal had in its verdict delivered on March 22, 2019 nullified the election of Oyetola and his party, the All Progressives Congress and declared Senator Ademola Adeleke as the winner of the poll.

But on Thursday, the Court of Appeal, in a four-to-one split decision of its five-man panel, led by Justice Jummai Sankey, nullified the majority verdict of the tribunal, which gave victory to Adeleke.

The Court of Appeal upheld Oyetola’s victory at the poll in three judgments delivered on separate appeals filed by the governor; his party (the APC); and the Independent National Electoral Commission, challenging the tribunal’s verdict.

Justice Sankey, along with three other members of the panel, Justices Abubakar Yahaya, Isaiah Akeju, and Bitrus Sanga, adopted the majority judgments on the three appeals, which went in favour of the APC and its candidate.

But a member of the panel, Justice George Mbaba, dissented from the majority judgments on the three appeals.

Justice Mbaba dismissed the three appeals and upheld the majority judgment of the tribunal which declared Adeleke the winner of the Osun State governorship election.

INEC had declared Oyetola and the APC the winner of the Osun State governorship election on the basis of the cumulative results of the September 22, 2018 main election and the September 27, 2018 supplementary poll. But the PDP and Adeleke filed their petition before the three-man Osun State Governorship Election Petitions Tribunal, contending that they were the true winners of the election.

The tribunal, in its March 22, 2019 split judgment of two-to-one, nullified Oyetola’s victory and declared Adeleke the winner of the election.

The tribunal’s Chairman, Justice Ibrahim Sirajo, in his minority judgment, dissented from the majority judgment credited to Justices Peter Obiorah and Adegboye Gbolagunte.

It also held that the absence of the records of usage of ballot papers and other details on Form EC8A, the result sheets in 17 polling units where the polls were cancelled by the tribunal was not an issue of non-compliance that should warrant the deduction of votes polled by both the APC and the PDP in the units from the parties’ overall scores.

It also held that the tribunal’s decision nullifying the September 27, 2018 rerun was wrong.

Delivering the lead judgment on Oyetola’s appeal, Justice Sankey agreed with Oyetola’s lawyer, Chief Wole Olanipekun (SAN) that due to his non-participation in the February 6, 2019 proceedings, Justice Obiorah, who turned out to be the one who wrote the lead majority judgment, could not have validly reviewed the evidence given during the said proceeding.

She ruled, “I find and resolve the issue in favour of the appellant and against the 1st and 2nd respondents (Oyetola and PDP).

“I declare the entire proceedings and the judgment of the Osun State Governorship Election Tribunal a nullity.”

She went on to resolve 10 out of the 12 issues raised in the appeal in favour of Oyetola and the rest in favour of the PDP and Adeleke.

She ruled, “The appeal of the appellant is allowed. The appeal succeeds. Accordingly, I set aside the judgment of the Osun State Governorship Election Petitions Tribunal in the petition EPT/OS/GOV/1/2018 delivered on March 22, 2019.”

In his dissenting opinion, Justice George Mbaba ruled, “The allegation that Justice Obiorah did not sit on February 6, 2019 is founded on speculation. The allegation is at best a well-articulated speculation by the appellant’s lawyers.

“Certainly, there is something amiss. There are very many inferences to be drawn; one is that the secretariat deliberately did not show he signed.

“One cannot rule out the possibility of sabotage in the secretariat of the tribunal.”

He wondered why Oyetola’s lawyer failed to raise the issue of Justice Obiorah’s alleged absence from the said February 6, 2018 proceedings at the tribunal, but chose to raise it for the first time at the Court of Appeal.

He dismissed the appeal and awarded the cost of N200,000 against Oyetola and his party.

In her lead judgment in the appeal filed by INEC, Justice Sankey ruled, “The absence of the ballot accounting in the Forms EC8A in 17 polling units is not substantial non-compliance and did not substantially affect the results of the election.”

On the allegation of “non-compliance” on which the tribunal anchored its decision, Justice Sankey ruled, “The only appropriate order is for a rerun as provided under Section 140(2) of the Electoral Act but not to re-compute the results of the election and to proceed to declare the 1st respondent or any other person the winner of the election.

“The tribunal was in patent error when it set aside the rerun election. especially when it found that the conduct of the rerun was not marred by malpractices and non-compliance with the Electoral Act, leading to the unwarranted disenfranchisement of voters in the seven polling units.”

Justice Yahaya who read the lead judgment on the APC’s appeal also resolved similar issues in favour of the party and against the PDP and its candidate.

But dissenting, Mbaba said the APC’s appeal was “the same in spirit, content and fact” and as such he had no cause to deviate from the dissenting opinion he offered in respect of Oyetola’s appeal.

On INEC’s appeal, he said, “I am happy to be on my own with utmost respect to my Lords. I do not agree with the lead judgment.”

He held that the tribunal was right to have rejected the doctored certified true copies of the election in 17 polling units as presented by INEC.

He added, “When INEC was called to defend what it did, it refused to show up. INEC shied away and was not forthcoming; but INEC is here appealing against the judgment of the lower tribunal.”

He said the disparity in the certified true copies of Forms EC8A, the results of the election and the duplicate copies tendered and admitted by the tribunal in respect of the seven polling units, “goes to the root of something dangerous INEC was doing.”

Reacting to the judgment on Thursday, Governor Oyetola said the judgment had validated the mandate given to him on September 22 and 27, 2018 by the people of Osun State.

Referring to the voters, he said, “You spoke with conviction; your voice and choice are clear to the world and the judiciary, the last hope of the people and arbiter of the truth, has proved to the world that it is always on the side of justice.

“This victory has proved to all and sundry that there is a limit to the extent falsehood and propaganda can thrive over truth and the will of the people.

“I urge you all to be peaceful and to go about your legitimate businesses as we revel in this well-deserved victory,” the governor said in a statement signed by his Chief Press Secretary, Mr Niyi Adesina.

With the news of the Appeal Court judgment, members of the ruling All Progressives Congress on Thursday took to the streets of Osogbo, Osun State capital in jubilation.

They were seen around Olaiya Junction around 12pm singing victory songs. The group later moved towards Okefia to receive Oyetola and top members of his cabinet who arrived in a convoy.

The crowd later converged on Olaiya Junction and moved through Odiolowo Workers’ Drive to other parts of the state capital, singing and dancing.

However, in Ede, the hometown of Senator Ademola Adeleke, there was no jubilation, even as the APC members celebrated moderately.

Also Ile Ife, the hometown of Hon. Albert Adeogun, was calm as residents of Lagere, Enuwa, Mayfair went on with their daily routines.

In Ilesha, many people believed to be the APC members were seen discussing the development.

In the Iragbaji, hometown of Governor Oyetola, many residents stormed the streets to celebrate.

In its reaction to the judgment, the Peoples Democratic Party on Thursday expressed confidence that Senator Adeleke will retrieve his mandate at the Supreme Court.

In a statement by its National Publicity Secretary, Kola Ologbondiyan, the party insisted there was no way the will of the people would be abandoned.

The statement reads, “It is instructive to state that the Court of Appeal did not contest or invalidate the fact that Senator Adeleke won the election but only cited technicalities and speculations to arrive at its decision.

“The PDP has also noted that the Court of Appeal failed to act on the full and substantial import of the failure of the Independent National Electoral Commission to produce the ballot papers and record of accreditation to disprove our position that INEC altered results and subverted the will of the people of Osun State.

“Our party and candidate are therefore confident that the Supreme Court will look at the merit of the matter and ensure that justice is served by recognising Senator Ademola Adeleke as Osun State governor.”