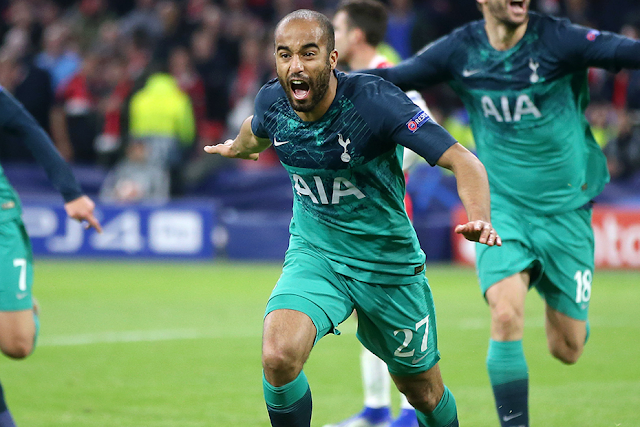 It was another unbelievable night in Amsterdam as Tottenham came from a two goal down to win 3-2 and 3-3 aggregate to go through on away goal rule.

Ajax, confident in the first half, were two goal up and 3-0 advantage going into the second half, but Tottenham came back into the game with two quick goals to make it 2-2 and buried the winner on added time.

Trailing 1-0 from the first leg, Spurs made the worst possible start in Amsterdam when a towering fifth-minute header by 19-year-old Ajax captain Matthijs de Ligt doubled the advantage for Erik ten Hag’s exciting young side.

Tottenham hit the post through Son Heung-min before Hakim Ziyech doubled Ajax’s lead on the night with a sweeping finish after an assist by former Southampton winger Dusan Tadic.

That left Spurs 3-0 behind on aggregate yet, in another pulsating semi-final, Mauricio Pochettino’s side scored twice within five minutes in the second half.

BBC reports that Moura reduced the deficit with a composed finish before the Brazilian’s shot on the turn levelled the scores on the night and left Spurs requiring one goal to reach the final in Madrid on 1 June.

In a frantic finish, Vertonghen headed against the bar before Moura completed his hat-trick with a finish from 16 yards deep into stoppage time on a famous night for Spurs.

Tottenham will now play Liverpool in an all English final on June 1 in Madrid, meaning that this year’s Champions League will go to England.

Liverpool had an unbelievable night on Tuesday after demolishing Barcelona 4-0 at Anfield and reached the final on 4-3 aggregate.