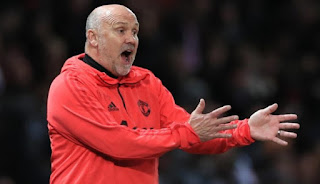 Manchester United assistant coach, Mike Phelan, has reacted after signing a 3-year contract that will keep him in the position on permanent basis.

He talked about all that the team has gone through since he joined the club.

Phelan and Ole Gunner Solskjaer have seen their United team waver of late after they got the Red Devils back on track.

“We’ve looked at things, we’ve assessed things. We got off to an unbelievable start.

“The players responded magnificently, really, by going on that great run, and what really came out of that was the fact that they enjoyed that spell. It was something that they hadn’t experienced before.

“We rode our luck along the way and yeah we’ve since hit a bit of a leveller, but it’s all about piecing things together and seeing where we can go, and it gives us an idea now of where we need to be and what we need to prepare for.

“We’re in a great position to be able to do that. We start from ground level and work our way up, as they say, so hopefully we can build on things.”

Phelan, meanwhile, is out to make history with the current crop of Red Devils stars.

“I think you want to create history, don’t you? It’s all about creating history,” he added.

“History’s here, it surrounds you. It’s all about: do you want to be part of the next stage of history?

“I think it’s important. We’re here tonight, and good young players are earning awards. That’s the start of it.

“You want them to progress. You want them to be influential now, going forward. You want to add to that and get the ingredients right, but it’s really a club that can inspire and take you to the next level, and we all know how good that feels.

“Myself, I’ve been on that magic roundabout and it’s a tremendous feeling.

“Coming back, you want to do it again, and it will take a lot of hard work, a lot of endeavours, but you’ve got to enjoy the moment, haven’t you? It’s a simple fact.

“Come in, train every day, enjoy every day, play the game in front of how-many-thousand-people – not just in the stadium but around the place, around the world – who really want you to do well.

“So it’s all there. You’ve just got to turn up and perform.”