Lawan reveals those who nurtured his senate presidency ambition 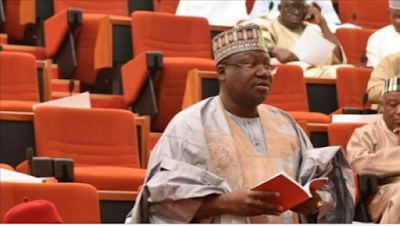 The Senate Leader, Ahmed Lawan, says his ambition to become President of the Senate in the 9th Assembly is a product of deep thinking by his fellow senators-elect.

Lawan made the disclosure, on Thursday, when he appeared on News Agency of Nigeria (NAN) Forum in Abuja.

“This project is a product of deep thinking by my colleagues, senators-elect.

“Some of our colleagues decided right after the Presidential and National Assembly elections to consider the possibility for us to run for the office of the senate president given our history and experience.
“So this is a project that originated from senators-elect themselves,’’ he said.

The lawmaker, who represents Yobe North Senatorial District on the platform of the All Progressives Congress (APC), said he had the requisite experience to deliver in the leadership of the NASS.

“I served very closely with most members in the house at that time and most senators on the senate side.

“I would have had a lot of engagements with my colleagues, tapped from their wealth of experiences.

“I have learnt a lot of things from both leaders of the NASS whom I served with and members that I also served with.

“So, we have what it takes and of course, that helps us in pushing the agenda of ensuring that the national assembly works for Nigerians,” he said.